I realized that I haven't posted for almost a year. It has been a supremely busy year personally and professionally, and my riding mileage has been down, but I have resolved to maintain a respectable amount of riding going forward.

M. and I decided to do the same thing we did last summer for vacation--Portland for a few days, and the San Juan Islands for a few--since we enjoyed it so much last year. One of the highlights this year of our stay in Portland is joining a group of folks (some I have corresponded with on various bike online groups or forums before) for coffee in the morning outside, at sunrise, at a location that we traveled to on bikes.

Andy and Chris I know from the Riv google group. They were kind enough to set up the date and location. At 5:30, Andy met M and me outside of our Airbnb and we rode through SE Portland neighborhoods, including crossing several very short gravel/dirt sections in parks to get to the foot of Mt Tabor. The morning air is crisp and we began to see a few commuting cyclists when we were near the foot of the hill. Tabor has a gentle gradient and is well shaded. We passed or were passed by cyclists, runners, and (dog)walkers. 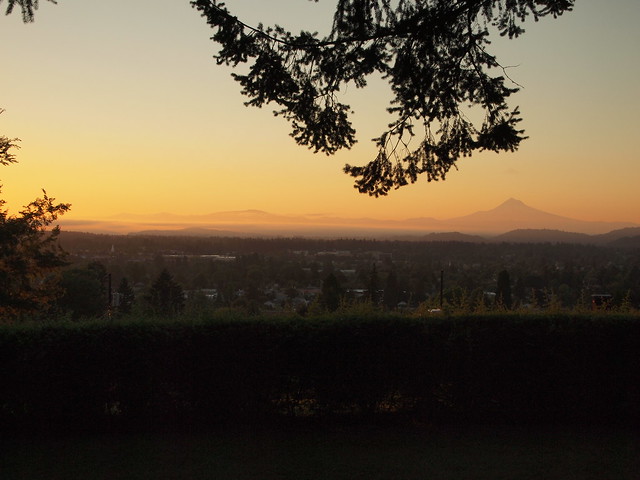 Not very long after, we reached a set of benches off the road. Though not quite the top of the hill, this location has expansive views to the East. four people were already there preparing their morning cup of joe. The equipment spans different water-cooking options as well as different coffee-brewing option. 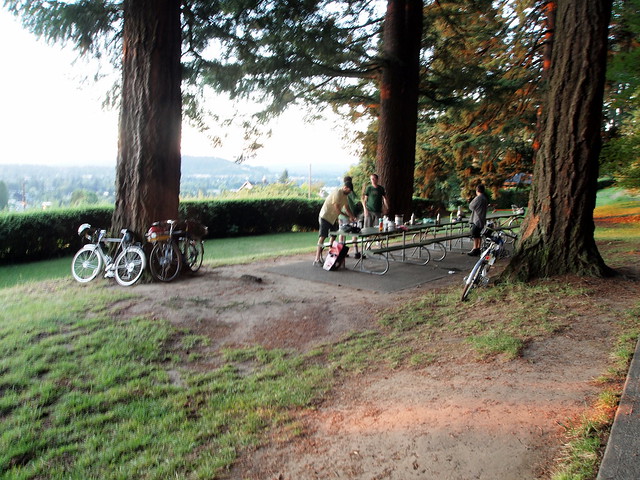 Sun just about popped out from behind a set of mountains at this point (slightly past 6AM). Chris made M and I a cup of coffee with beans roasted by Courier Roaster and a ceramic filter cone. The drink is very good. The conversation, equally good, ranged from ride stories, stories on encounter with Riv folks and Jan Heine, and Portland stuff. The bikes were also very nice: there were at least 4 Rivs, a couple of 80's steel bikes, and my Kogswell.

I chatted with different folks and found out that Oliver follows my blog and also has a Kogswell P/R (which is partly why I am writing again, as I realized people actually read this blog). He was kind enough to take us to the top of Tabor as the group dispersed to the morning affairs (it's a work day after all). 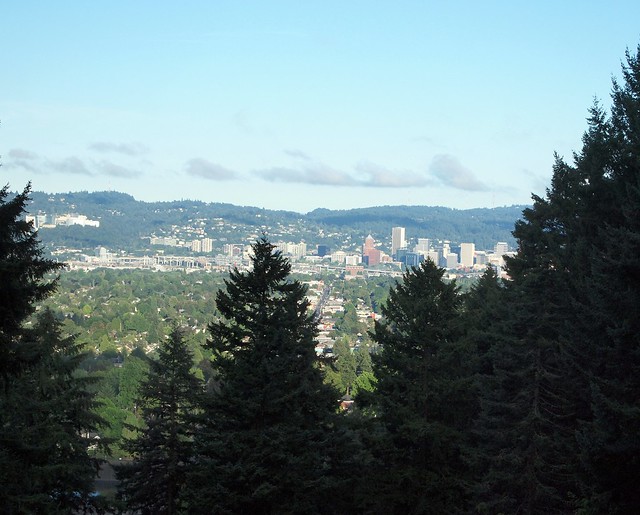 We descended back to SE Hawthorne and cruised toward breakfast. along the way people were opening their garages ready to leave for work, but in most instances instead of a car, a bike or two pulled out, and we were riding amid many other cyclists on every street. One guy chatted with us for a couple of blocks and gave us direction on how to get to a New Seasons Market.

It was an enjoyable way to start the day, and I am grateful to participate in the fun ritual of sunrise coffee outside. I have since purchased a Hario grinder and an Aeropress, now I am ready to do coffee outside in the East Bay also! Who is in?

The rest of the pictures that I took of Sunrise Coffee on Tabor is here.