Ebisu in for a fit

About 100 miles into the SFR 300k workers ride (which I abandoned at mile 162 of 187), I began to feel pain in the inside of both of my knees. I was able to continue riding for another 60 miles, but I know the fit needs some adjustment. M. is still coming back from her injury last year after the Shasta Super Century, and the Ebisu Road is new to her. We finally decided to go to a local fitter with good reputation to get ourselves fitted on our bikes.

Rick at Eden Cycles in Castro Valley comes highly recommended, both online as well as by a couple of personal friends. He fitted M. first, moving her seat slight forward and up, and moving her stem higher, brake levers higher on the handlebar, and rotating the handlebar downward slightly. He also spent quite a bit of time adjusting her cleat positions.

When he got to my bike, it was a little embarrassing because I have been building my own bike for 6 years now, and always thought that I do a good job putting the saddles, the stems and the handlebars at the right place, but apparently they weren't super close on the Ebisu. My seat has to go up almost a full centimeter. I also needed to get a shorter stem (the Pearl 10 is really 11cm long) and a seatpost with longer set-back to compensate for the short rail on the Brooks saddle.

Rick told me to get these parts--long set-back seatpost from Velo Orange, and a true 10cm stem--then come back to him. I want to make sure that the top of the handlebar can stay pretty close to parallel to the ground, so I decided to get a 9cm stem. Because switching in and out of quill stem is so much pain, I decided to go with Velo Orange's stem extender/threadless stem combo. Maybe once I get the fit dialed in I can get a Nitto Technomic Deluxe that's the right size.

We went back two weeks later, as M. needed another look on her cleats, as previous settings cause some slight knee pain. Rick played with her cleat adjustments for a while and actually made a visible improvements. He send M. out for a test ride and began fitting me. He ended up moving the stem/handlebar up 8mm, and rotated the handlebar down ever so slightly. He also adjusted my cleat positions. I went out for a test ride and felt really comfortable. Rick does know what he is doing. 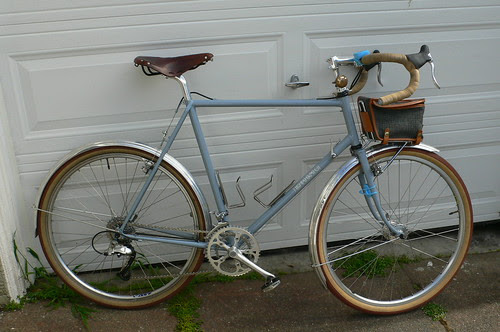 We came home and I stared at the bike for a while, and something isn't quite right. The stem was a little too high. After using a level I found that the stem is actually a hair higher than the saddle. Rick raised it up so high because I told him I spend quite a bit of time in the drops, and he wanted me to be comfortable there. I think that with time my flexibility will come back to early season form, when I did 3 brevets in a 5-week span. I moved the handlebar down for about 5mm so the handlebar is lower than the saddle again. I haven't tested the set-up on a long ride yet. Hope to do it this weekend.

Other changes on the Ebisu include moving to a lower-Q-factor crankset--Sugino AT used as a compact double with 50/34 chainrings and a Shimano R700 compact double front derailleur. I probably will eventually move to a 46T large ring so as to have more ridable gears, but for now the 50T works.

Update (6/6/2010):
The fit has largely worked for both of us. I have no issue so far. After a follow up, M also had no issue for a few weeks. After a longish and hillish ride in Menodocino, and sat in a car for 5 hours coming back to the Bay Area, she woke up next morning with some IT band tightness. To help with that I decided to get a slightly longer BB spindle, since her cleat has maxed out in terms of lateral adjustment.

The recommended BB spindle length for the Sugino XD-600 cranks is  113mm, and at the time her Ebisu had a 107mm. I though getting a 113mm would surely help. After I got a VO 113mm bottom bracket from Box Dog Bikes, I compared it with the 107mm BB, and realized that the large majority of the 6mm difference sit on the non-drive side of the BB. The long BB gains 1.5mm on the drive side and 4.5mm on the non-drive side! To help gaining even more on the none drive side, I put a 1.8mm spacer ring on the drive side cup.

After a longish and hillish ride. She felt fine, but later in the day, the medial side of her left knee (inside) felt some pain. After reading various internet sources on knee pain and adjustment, and knowing that the non-drive side has gain 2.7mm, even though a spacer is put on the drive side, it was pretty clear that the additional external rotation that her left knee experiences is giving her some problem.

My wife and I moved from our old place to another apartment in the same neighborhood a few blocks away in Berkeley. The apartment is one of the units in a triplex we bought a couple of years ago. I have lived at my old house for the last 6 years and ran it as a communal living space. I leased out rooms to other nice folks and share common space with them. It worked out well--I met my wife this way--but once we got married we found that we prefer a little more space. I sold my shares in the old house to my friend and co-owner and moved to this nice 1-bedroom apartment, as coincidentally our tenant in that unit vacated around the same time.

Once we got our things moved, refinanced the mortgage, and filed our taxes, we can get back to more riding and I tinkering with bikes. One great thing about our new place is that it has a proper garage. At our old place I stored my bikes, parts, and tools in a general area that also housed the laundry machines, the water heaters, and the furnace for the central heating. It worked but the space was pretty tight. If others came in to do laundry while I was tinkering with one of my bikes I had to move it aside. The lighting in there was also sub-optimal and I often lose bolts, nuts, and other small but important things in the dark maze that's the laundry room.

Because we have a garage and we don't park a car in it, we got plenty of storage for our stuff and I got to keep sufficient space to store bikes and have a work-bench--I actually have a real bike garage!

Now that summer is coming we will be getting out there more to do some more riding. I am psyched about the night 200k in June to test out my SON20R generator wheel and B&M IQ Cyo light. Overall, I simply look to ride more this summer.

I just sold my Raleigh One Way, as it was just a little too small for me and my knee isn't very happy with the fixed-gear thing. Now I am looking to get a geared replacement--will it be a burly mixed-terrain bike? How about a true tourer? We will see.
1 comment: