My new commuter and fixie: the il Pompino by on-one

Update: here is the geometry table from On-one

Over the weekend I traded my chrome italian fixie (sold on the local craigslist) for a used il Pompino (bought from my friend steve). The picture above is taken on the first hilly ride after the build. I will elaborate on the whole story a little later. For now, here is the build list: 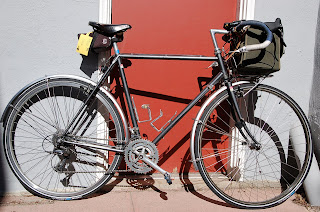 I started to become more interested in doing various type of bike touring last spring. The only time i'd really do any type of traveling with my bike was the summer of 2005 when I was hanging out in the St Juan Islands in Washington State before starting my current job. I actually wanted to go to Vancouver, but since the immigration paper for my new job hasn't come through, I told my friend to leave me at a hotel in Anacortes so I can hang out on the islands. I had my fixed gear bike with me, and did some island-hopping (with the great ferry system) for 4-5 days and it was fabulous. Granted I didn't carry any significant load with me during that time, I enjoyed the experience of traveling on my bike.

I wanted to do a bike trip (haven't decided whether it's inn-to-inn or fully loaded) sometime soon, but I didn't have a suitable bike for it. my romulus could probably work, but since I already weigh more than 190lbs, i wasn't sure if I should add a full-load to the bike. So I sold my other road bike (90's specialized Epic Carbon) and looked around for a good used touring frame. I found a 84' specialized expedition deluxe on the local CL. After reading more about it and found that many people have high regards for the frame, I pulled the trigger and got the bike. It came with many parts, but for my purpose and preferences, the only part that ended working for me was the Sugino AT crankset and the 26.8mm seatpost. I began to gather parts for it and thought about wheel options. Here is the build list I arrived at, and pretty much still the same after almost one year: 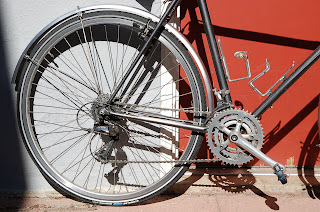 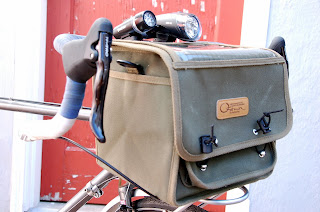 Building this older frameset with modern components that I wanted or had was not without trouble:

- I couldn't find flat shifter boss covers (the piece that fits in between the shifter pod and the shifter lever) so I ground two oval-shaped ones flat
- I didn't realzed that XTR reverse rear derailleurs don't come with barrel adjusters, so I made one from old brake barrel adjusters. It works.
- The frame has to be re-spaced to 130mm, and then the LX hub has to be re-spaced to 130mm also (from 135mm). 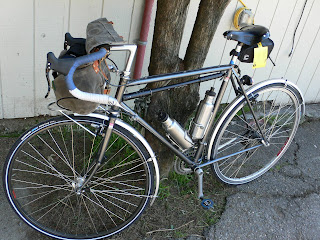 So far I haven't done touring yet, but put about 2000 miles in the 10 months I have had the bike. Most of the miles came from training and riding the 2007 STP (seattle-to-portland) but since I have had fenders on it, the bike has also become my rainy day bike over the romulus. It rides really well, supple, compliant, yet not mushy at all. I was really impressed with the ride quality when I finished building it and took it out for a spin for the first time. Hopefully I can make good use of it as a tourer and randoneering bike.
No comments: