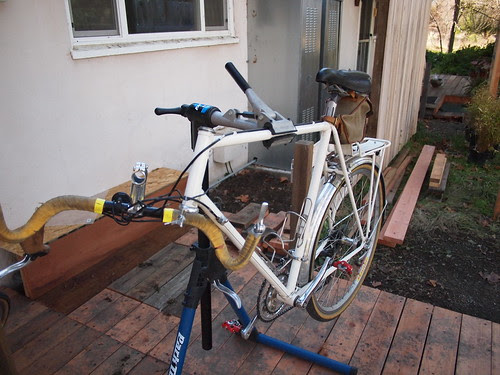 In the summer, I built up a 80's Specialized Sequoia using parts from an outgoing Rivendell Bleriot. I like the Bleriot a lot, but the Sequoia was livelier and with similar Geometry. I converted it to using 650b wheels. The only aspect of the bike that I was nitpicking in my mind was the fork geometry. Ever since I purchased the Kogswell P/R and my Ebisu All Purpose, which have low- and medium-trail respectively, I have come to prefer that type of front end geometry. The Sequoia was fun as it were, but the handling doesn't track my input as well as my other two bikes, and on steep climbs the bike wanders a little more than I prefer. An acquaintance was selling his first-gen Kogswell P/R fork (that has high fork rake offset) and I jumped on it, but quickly realized that the P/R fork has 1 1/8" steerer, and the head tube for the Sequoia takes 1" steerer. 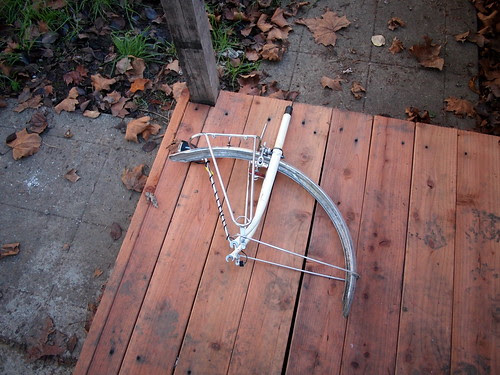 I posted a message on the Kogswell Owners' Group to solicit a trade, and Kurt from Alberta responded. He had in his possession a Kogswell Konversion fork that has 64mm of fork offset and 1" steerer and he was looking to get a 1 1/8" high offset fork for his 2nd-gen P/R. After confirming that we had what the other person wanted, we shipped the forks to each other. The Koversion fork was painted custard like the first-gen P/R. I found a powder coater and painted as close to the vanilla paint on the Sequoia frame as possible. I also purchased a set of home-made headset tools--including a headset press, a cup remover, and a crown race installer--from eBay so I can swap out the headset, since the Konversion fork has a theadless steerer.