The alarm clock was blaring at 4:30 in the morning on saturday, 9/29. Megan and I woke up slowly, got out of bed and began to get ready for our ride today. We trained and completed our first double century this season (STP in July) so getting up early is no big deal. We are familiar with the routine of getting ourselves ready to ride in the morning. This is one ride that I look forward to every year, because it's the ride that got me into cycling and it's pretty special compared to most other organized ride.

The Buddhist Bicycle Pilgrimage started when Dennis Crean, an editor, cyclist and Buddhist practitioner thought that it would be fun to ride from the Bay Area to Abhayagiri Monastery where he practices with a few friends. That idea evolved into the first Buddhist Bicycle Pilgrimage in 2002 where about 100 people, cyclists and volunteers included, participated in the event. I have known Dennis, partly because my own connection to City of Ten Thousand of Buddhas (CTTB; a Buddhist monastic campus in Ukiah; it's a stop on the ride and close to Abhayagiri, the destination) and he asked if I would like to participate and help coordinate communication and set up at CTTB. I was very intrigued of the idea of riding a bike for 150 miles and also getting to meet other people interested in Buddhism and cycling. I went to Missing Link in Berkeley and bought myself a Marin Mill Valley ALP and started training. That was my initiation into the world of cycling and bicycles.

Fast forward back to the morning of the ride in 2007, we got our gears and bikes into my friend Steve's car, picked up my friend Annie at her place on the way and headed for Spirit Rock Meditation Center in Woodacre, near San Rafael, California. I have participated in every one of this event (6 times) as a rider except for the second year when I broke my arm one week before the ride, ironically, training for it. Even though, I always get really excited over it because it's probably my favorite organized cycling event. We start in Spirit Rock every year, and wind our ways through the beautiful backroads of Marin, Sonoma and Mendocino County to our destination in Redwood Valley near Ukiah. We stop at the end of the first day at the KOA campground in Asti (15 miles north of Santa Rosa). The second day we stop at my old stomping ground CTTB for lunch and then reaching the destination Abhayagiri Monastery by mid-afternoon. There is a gear truck that helps carrying all of the pilgrims' gears (including tent, sleeping back and clothes) along the way, and just like most other supported rides, there are pit stops along the way, and SAG vehicles patrolling the route. What's different, is that there are Buddhist teachers giving the pilgrims encouragement and Dharma talks along the way (there are at least 4 formal gatherings for Dharma talks on the ride) and pilgrims are encouraged to be mindful of their thoughts along the way. The objective is not so much to get to the destination (although that's important, too), but to engage oneself in mindfulness along the way. 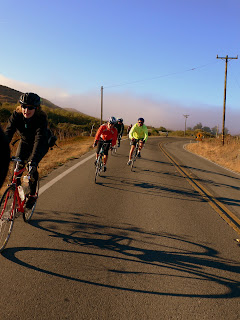 (Megan and others climbing up Cheese Factory Grade)
We started rolling at around 7:30am from Woodacre. The route takes up down Sir Francis Drake to Nicasio Valley road, then over a small climb to the town of Nicasio. Megan and I are very familiar with this road as we trained on it many times during the summer. Along the way we passed fellow pilgrims and usually greeted each of them with a "hi" or a wave of hand. We rode through Nicasio and next to the reservoir and made a right turn on Petaluma-Pt Reyes Road to climb the "cheese factory grade" (the famous cheese factory is on the other side of it). The fog has already cleared out at this point, though the temperature is still fairly low. The pilgrims worked over the top of the grade, descended and rolled past the factory. The first stop is right after the left turn on Hicks Valley Road at the one-schoolhouse Licoln School. As we rolled in, cyclists, volunteers and monks gathered. We grabbed some food, filled up the water bottles and chatted with a few folks. The first few years basically no one from my personal group of friends rode it with me. During the last 2 rides I started to get a few friends to participate with me. I made sure that they were all ok, grabbed Megan and got on the road. 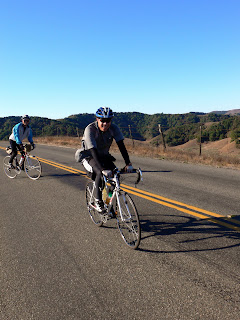 (Steve and Kevin on the top of Wilson Hill)
We rode on Hicks Valley Road through mostly ranch landscape. I know the route well and told the group that was with me that we are hitting Wilson Hill pretty soon. Wilson Hill Road is only a handful of miles from the first rest stop and I consider it the most difficult climb of the entire pilgrimage. I can remember the difficulty I had when I first attempted it. After 5+ years of cycling regularly Wilson Hill is no longer a monster for me, so went down to a comfortable gear and spun my way up the hill with Megan (who is a superior climber) at a decent pace. The view on top is quite nice, as you get a good sense of pastoral Marin county. Several friends of mine were not far behind and I stopped to snap a few pictures. The descend on the other side is fast and fun and it leads to Chileno Valley Road where the route takes a left turn.

Chileno Valley Road typifies the pilgrimage route very well--country road, mostly of the ranch variety with low car traffic and rolling terrain. It was very pleasant on this early autumn day. I rode with various groups of riders and chatted with a few of them. Many of them are first-timers and most are pretty impressed by the fact that I have been doing it every year since the beginning. What seemed like a long stretch on Chileno Valley Road even a couple of years ago didn't seem that long this time (the stretch is 9 miles). We rolled into Two Rocks School, our second rest stop at around 9:30 and had plenty of time to stretch, eat, go to the porta-john, chat with people. We probably stayed there for 20 minutes (a bit too long), and decided to roll toward our lunch stop.

After Two Rock the route varied from last year's route; instead of taking Valley Ford Road all the way to Valley Ford and then go through Freestone, Occidental, Monte Rio, and the Guerneville (and along the Russian River for part of the way; I love that stretch), we rode inland on Roblar Road toward Sebastopal. The roads are nice with light traffic and quite scenic, but I couldn't help but miss the rumbling in the woods and by the river on the old route. Part of the new route took us onto West County bike path, which I thought was neat; we were off the street for quite a while. It was only 18 miles from Two Rocks to our lunch stop Sae Taw Win Center in Sebastopal. 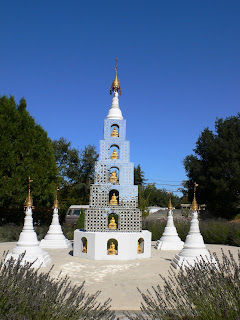 It's a Burmese Buddhist retreat center. Dr. Thyne Thyne is the resident lay teacher, living there with her family. The property has a main house, a few barns and a nice garden. It also has a shining, reflecting Buddha Pagoda. We ate simple lunch (salted boiled potatoes, pretzels, fruits, PB&J) and hung out with other riders. Ajahn Amaro from Abhayagiri who traveled with the pilgrims on the route, and Dr. Thyne gave Dharma Talks after lunch. It was nice to be together with everyone for lunch, but I thought the time was a little too long.

At about 1:30pm, I filled my bottles, grabbed some more fruit and got on the road. In past years when I didn't ride as much as I did this year, the afternoon of the pilgrimage always presented some challenges for me. For one, it used to be longer (by going inland, the distance was 12 miles less than years past, with all the miles lost before lunch time). Another factor is that I used to not know how to hydrate myself properly and always experience cramps in the legs in the afternoon. And I simply wasn't in as good shape as I was this year. After training so much in the summer (for a 6-week stretch, I was riding basically a century every saturday, and then 30-50 miles on sunday), 35 miles in the afternoon seems fairly easy going. Megan and I went at a comfortable pace to take in as much scenery as we can and chatted with other pilgrims as we go. It felt great to be able to relax and not feeling exhausted. The afternoon route is pretty much the same after the initial 6-8 miles. We rolled through beautiful vineyards in Sonoma backroad toward the Mendocino County line.

I couldn't help but thought having all this grapes around as a waste. We had a drought this year in California and pretty much the rest of the country, and yet we have all these grapes that need irrigation when water is being rationed in some parts of the country. It's true that some of the water got turned into grape juice or more likely wine, but it's in much smaller amount and one has to pay premium for them (and no one normal will use wine to flush his/her toilet, i guarantee you). I am not against grape growers, but compared to the need of water everywhere, irrigating grapes seems to be a big waste of water.

This section of rolling roads in Sonoma vineyards went by rather quickly. The weather was still cool and it was rather pleasant. we crossed the lambert bridge and made a left turn at the Dry Creek Store. Megan and I decided not to stop at the 4th rest stop and continued riding. There is a slight hill after the right turn onto Canyon Road. I saw Rinaldi ahead taking a break. He has been going full-speed all afternoon. While it shows his progress after all summer of training, I can't help but want to tell him to slow down a bit and enjoy the ride. Afterall, when you finish riding, it's done. Megan and I went at a pace that is slow compared to the pace we were going when we were doing the Seattle-to-Portland (STP) ride, but we were not as good shape as in the middle of the summer and we wanted to enjoy the ride.

After going under the HWY 101 overpass, we were onto the home stretch. I always enjoy this last stretch on the frontage of 101. I have been more careful with my hydration since the slight disaster at the STP so my legs were ok and not cramping. We rolled through the last stretch and were getting ready for the final climb.

I got down to my lowest gear on the middle chainring and, got off my saddle and started to go slowly up. Megan, though complained about being tired, kept a faster pace up the hill. Just as when I began to lose sight of her, I started to see the campground. I told myself that there is less than 100ft to go. Before you know it, i was there.

We tossed the tent together, took a shower and felt really pleased. It was a good first day.
No comments: