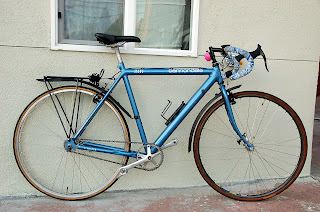 I convinced Megan in November that she needs a touring bike. It seems odd to her because she already had one--late 80's Cannondale ST600. It was my first gift to her when we first began to see each other and she is somewhat attached to it. I bought the bike on Craigslist fairly inexpensively, and thought it would be a good first bike for her to try it out before committing to nicer bikes (which she did when we got her the Torelli road bike later that year). The Cannondale came with both front and rear racks and two sets of panniers. Even though it was still in good conditions, I have reservations whether it can withstand the rigor of a tour, or even a long bike ride. After some persuasion, Megan decided to pull the trigger and buy a touring frame.

I got a 1984 Trek 620 frameset and built it up a couple of weeks ago to be Megan's touring/long-distance/winter bike--she is fond of old Treks (I will write another entry about how I built up the trek later, but this one is for the Cannondale). Megan and I decided to transfer whatever parts possible from the Cannondale to the trek and then convert the Cannondale to a fixed gear. I have been harping on the benefit of fixed gears--that it can help increase leg strength and smoothing out one's strokes--and Megan enjoyed the ride when she borrowed mine. The bike still had almost everything except for the fixed gear rear wheel. I decided that this will be my first wheel-building project.

I ordered the Surly fixed/free hub (130mm), Sun Rims CR-18 (32h) and a wheel set of double-butted spokes and brass nipples. I sat in my bike garage last saturday evening, followed the direction in Jobst Brandt's book on bicycle wheels and built my first wheel. I took it over to Missing Link for the wheelbuilder there to make sure it was ok, and it was. So I am off to finish the conversion.

The Cannondale presents an interesting challenge for fixed gear conversion--it has near vertical drop-out. I bought a half-link from Missing Link and hoped that with the combination of cog, chainring and the half link I can make it work. After fiddling around with a couple of chainrings I found the winning combination--39/18. after the wheel went on, I retaped the handlebar, adjusted the brakes and Megan now has a very light fixed gear to go along with her Torelli road bike and Trek touring bike. 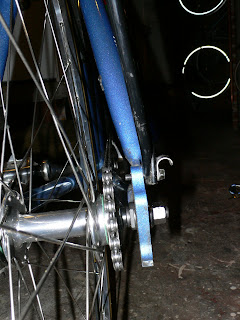 We went out on a night ride in the Berkeley Hills a couple of days ago after we received our bright headlights in the mail. I ordered a couple of Busch & Muller Ixon IQ from Peter White Cycles. They are very bright and the whole device is well-designed, if you are looking for headlight for bikes that allows you to see the road, I highly recommend these. They are not too expensive, either. We rode up Spruce (a somewhat gentle approach to the Berkeley Hills) to the intersection with Grizzly Peak, then rode down Euclid. We returned to Spruce on Eunice and climb up again on our fixed gear. It was a wonderful experience overlooking the San Francisco Bay at night. Megan enjoyed her fixed gear, and liked how she can modulate speed with her legs. She also enjoyed the quietude of riding at night.