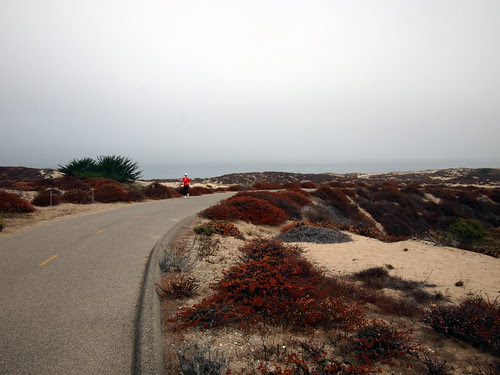 A friend needed his car driven down to Carmel from Berkeley. I thought about different ways to do that--get my wife to follow me in our own Volvo, spend a day at the beach then come back to Berkeley, drive down then take the bus to San Jose, then Amtrak back to Berkeley. I have never ridden the route between Santa Cruz and Monterey, so I put my Specialized Sequoia in the car and drove down to Carmel in the morning. I took a walk with my friend along the water front and chatted for a while. At around 10 or so I departed from his house in Carmel and began to ride northward.
Originally I wanted to take 17-mile drive along the coast to Monterey then get on the Monterey Recreational Trail. Given that I started later than I planned, I rode across Highway 1 then climbed Aquajito Road to descend into Monterey. This alternative route saved me about 10 miles of riding. 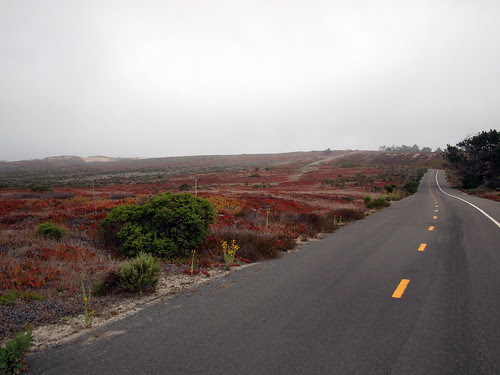 I got on the Monterey Rec. Trail near the Naval Postgraduate Academy in Monterey. The trail is very nice--well-paved, great views, and not crowded. It also allows a cyclist or a runner to stay off the street for quite a long way. I rode the trail all the way to Molera Road. Molera Road is a wide side road to HWY 1 nestled in vegetable fields. I had to get on HWY 1 north. Though the shoulder is wide, and I saw few other cyclists, mostly in the opposite direction, this wasn't a fun stretch to ride. The cars went by pretty fast, and even though I mostly felt safe, the noise was loud. It was also very exposed, and I had to battle headwind all the way until I turned off on Salinas Road. The conventional wisdom of riding north-south on the west coast held pretty true today! 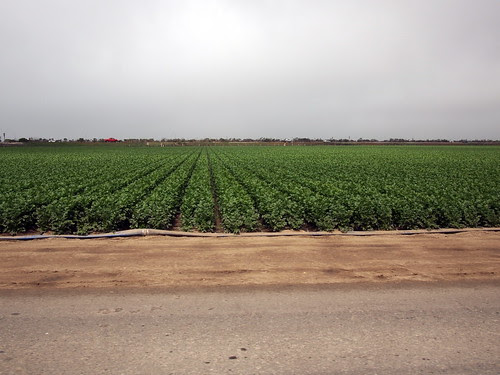 Salinas Road passes through the small town of Pajaro en route to Watsonville. I could have stayed on the coast and take San Andreas Road to Aptos, then Capitola and Santa Cruz. But turning inland to Watsonville gave me more shelter from the headwind. I found a Safeway along the road, locked my bike and bought some food while I pondered my options. The miles of headwind on HWY 1 tired me out some, so part of me is tempted to find a bus to take to San Jose. However, not having any sort of connected device with me I  would have to ask for direction to a transit terminal, then figure out the time of the bus. Given it was the weekend, it's likely that even if a bus runs to San Jose, the time gap would be huge (later I found out that there is no direct bus between Watsonville and Santa Cruz). I decided to load up on energy bars and ride Eureka Canyon Road to the Summit and back to San Jose via the Los Gatos Creek Trail. 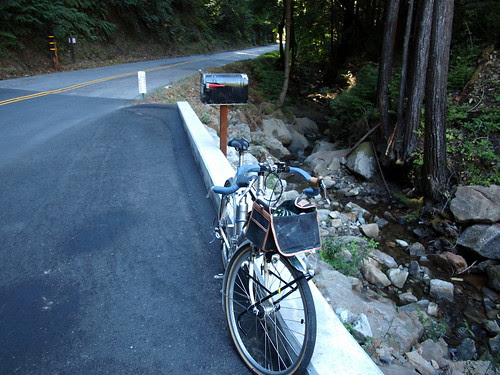 From Safeway I rode the mostly flat 4 miles to Corralito. Eureka Canyon Road stayed basically flat for more than a mile after it begins. As the climb increased in gradient, I began to suffer a little, mostly from a desire to take a nap. I got off the bike 3 times to drink and ate food, and closed my eyes for 5 minutes to see if the desire to sleep would subside. I definite struggled more this time than when I rode it during last Christmas, even though I was carrying more load then. After what seemed like a long time, I got to the intersection of Highland Way, which though started with a short downhill section, climbed gently for a couple of miles before finally descending to become Summit Road. At this point, it was clear to me that I would miss the 5:50pm train at San Jose, so I took a more leisurely pace down Old Santa Cruz Highway and on the Los Gatos Creek Trail. It was getting close to sunset and folks were out for their evening stroll/jog/ride. I got to Amtrak station at 6:25, and waited until 7:50 for the next train. It was a nice day of riding. 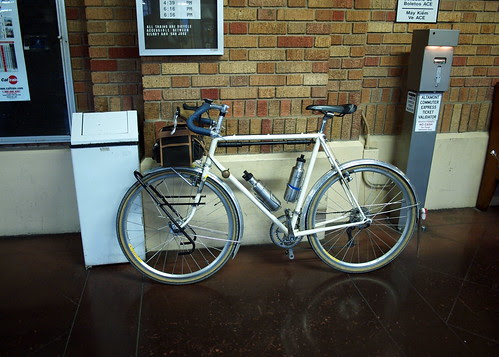 Eureka Canyon Road and Highland Way combined to be the highlight of the route. It was shaded and gradient was gentle. Once you get to the top you get a great view of the valley below. If I don't have to I won't ride south-north along the coast for very much, as the headwind really makes it miserable. My sequoia performed well; on a short section of dirt on Los Gatos Creek Trail the 650b Col de la Vie tires performed well. One thing I am thinking about changing on the bike is the 50T large chainring on the crankset. For this type of riding I think 46T or 48T is plenty for the flat, and allows me to stay on the big ring longer on the gentle climbs.
No comments: