M. has been unsatisfied with her Trek 620; we bought the frameset and then built it up to be her loaded touring/brevet bike since her main bike, the Torelli Corsa Strada cannot take fenders and racks. The Trek 620 turned out, not surprisingly, to really behave more like a stiff, chunky, loaded tourer (duh, Trek designed it to be one) than M. would like in a brevet bike. So the search was on for a brevet bike that's nimble, fast and can take some load (M. is light, so she could even probably use it as a touring bike). Added to the difficulty is the fact that we just bought a property and don't have the same liberty to splurge on bikes as we did 4 months ago. I was off to eBay, Craiglist, and various mail list to hunt for a frame.

We considered buying new or used Rivendell Bleriot, Soma Smoothie ES, and Kogswell P. I know these are all great bikes and I might eventually jump on a used Bleriot or new AHH/Saluki later, but M. wants to ride the bike before buying it. Even though Rivendell has undoubtedly several Bleriot in stock, we were not planning on spending $1900 for a new, built-up bike or $750 for a new frameset; and we wouldn't want to waste Riv's time unless we plan on buying the bike there. I asked around to see if someone has a bike around here to test ride to no avail.

One day I was on a ride with my friend Steve who just acquired a Serotta Concours Ti from Serotta's online classified. It was a stunning looking bike and very light. M. tried it around the block and was impressed with the ride quality and the looks. Later, I found a Serotta CRT on the local Craigslist. Coincidentally, a local iBOB lister wants the record 8-speed group on the bike, so he picked it up. After stripping the parts, I picked up the frameset with Chris King 1" headset with a go-ahead from M.

This build is not without difficulty; even though the CRT--Colorado Rapid Tour--has tour in its name, and it has braze-on's for fenders and rear rack, the tire clearance is pittance compared to what I am used to and generally look for in a bike. With 700c wheels, the front has brake reach of 50mm and the rear has 45mm brake reach. There is no way I can fit true 28mm tires in with fenders on. Since this was supposed to be M.'s brevet bike, versatitilty in terms of fenders and racks are required. I thought long and hard about it and decided to proceed with 650b conversion.

The only tricky part is the BB drop; on the CRT, the BB drop is 80mm, definitely outside of the 72mm-75mm maximum drop that Grant Peterson and Ed Braley recommend. The frame, with 25mm tires on 700c wheels had a BB height of 260mm; if I use 650b wheels with 32mm tires on, the BB height will end up to be between 245mm and 250mm, maybe a little low for comfort.

I sent a question around the iBOB list soliciting wisdom from folks on BB height in combination with crankarm length to see in practical experience would pedal strike be a problem with this consideration. Several members told me that they use 170mm or even 175mm cranks on bikes with 250 or 255mm BB height and almost never have problem. Since the cranksets I have for this bike is Sugino XD2 165mm, I decided that the conversion might be worth a try. The potential for pedal strike has also lots to do with riding style through turns; since M. rides pretty cautiously, especially on downhill descend, I think the conversion might work.

I gathered the parts needed; I have most of the parts lying around. I have to grab the 34.9mm record triple front derailleur because serotta has a seattube with increasing diameter toward the BB. I bought some Grand Bois Cypres 32mm tires from I's Bicycle when I was doing business in Japan, and asked Hiroshi at Jitensha Studio in Berkeley to build me a rear wheel with an NOS ultegra 9-speed hub and a velocity synnergy 32h rim. I built the front wheel myself with an older White Industries road front hub and matching rim. The tektro R556 brakesets took a little longer to arrive so I built up the rest of it first, then finishing it up this past weekend by installing the brakes and doing all the cabling and adjustments. 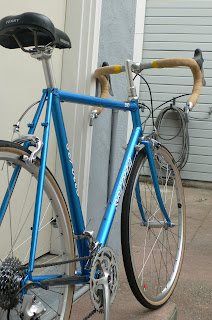 The result is a pretty-looking bike (more photos here) that rides fairly nicely, and has oodle of tire clearance. M.'s first impression is that it rides similar to her Torelli--responsive, fast, and nimble--even though the bike has 650bx32mm tires on and a pretty stiff BB shell section (thick tubing diameter close to the BB). She will get a better sense on a longer ride.

I am not sure how the pedal strike concern will play out. I tried my best--use 165mm crankset and 107mm spindle BB--to squeeze out as much pedal-striking clearance as I can, and hope that M.'s not-so-aggressive riding style will keep the bike out of trouble. The next step is for me to borrow my friend's Col de la Vie (which measure close to 35 or 36mm) to see if they fit in the rear dropout. If they do, I might get some Grand Bois Oursons to push the BB a little higher.

It is still missing: