A blog about bikes and rides

I started to become more interested in bicycles and cycling in 2002--although I have been riding bicycles since I was young and have always enjoy riding around--when a friend of mine asked me if I would like to participate in a 2-day 150-mile bike ride here in Northern California. I was living in San Francisco at the time (Marina area, actually, for those of you familiar with the city) and decided that the best way to train for it is by riding a bike 4 miles to the Caltrain station and then getting off the train 5 miles from work and then ride to work. I didn't have a bike at the time (I had a campus cruiser when I was a graduate student at Stanford that I gave away when I graduated). I went to Missing Link in berkeley, and was originally intending to spend around $400 on a hybrid, but after I tried a Marin Mill Valley ALP, which is essentially a road bike with flat handlebar, V-brakes, and slightly bigger (700x28c) tires, I was overwhelmed by how smooth it felt(compared to all the bikes I have had before) as it glided across the pavement in downtown Berkeley near the shop. I ended up buying that bike and started my love affair with bikes and cycling.

At the time I also bought a helmet, lock, water bottle, light, and an assortment of accessories. I'd wake up at 5:15am and started riding from my apartment in the Marina at 5:40 to catch the 6:10am train at the train station at 4th and King streets. I really enjoyed it a lot although I had a major accident less than a month into it and almost died (more on that in a different entry; I had my helmet on, which for sure saved my life). I continued to ride after recovering from the accident and repairing the bike. At the end of the season, I was able to complete the ride (Buddhist Bicycle Pilgrimage) that I set out to do in the beginning of the season fairly easily. I have always been fairly fit and in-shape, and at the time run and play basketball a lot, but I was hooked on cycling for life.

Somewhere in between then and now, I got into bicycles--learning about them, repairing them, building them up, their components, different bike makers--and have since helped several of my friends and girlfriend getting into cycling. This blog is to be a deposit of the processes I have gone through, as well as experiences and knowledge I gained as I continue to work on bikes. I will also include ride reports on different rides I go on. In a few weeks I will be in Seattle doing the STP (Seattle-to-Portland) ride and I will try to write a report on that as my first ride report for this blog.

As I have more time, I will start to post pictures of my bikes and write about how I set them up, and various bike projects I take on for my bikes of bikes of my friends and family. I do most of the work myself, though do not yet trust my skills in wheelbuilding (Chuck at missing link is a great builder and I recommend his service to anyone). I will also recount some learning experiences I had in the recent past on building up or repairing some interesting setups. 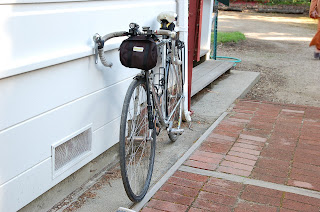 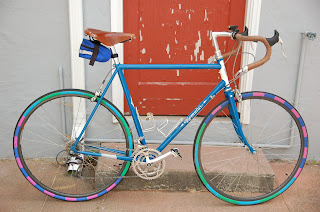 Currently I have a Rivendell Romulus, a 84' Specialized Expedition Delux, and a fixed gear bike that is coverted from a italian frame of 60's vintage and unkown origin. I will have separate post for each of them, but for now I will just post pictures of them. 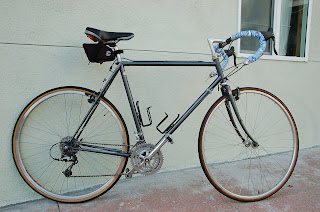