I brought the GT Tachyon to my office in Ukiah where I work part of the week. I have been riding it between my office and my cottage. It now sports a Tubus Cargo rear rack and I use a Seattle Sports roll-top small pannier to carry my stuff around. I have also remedied the overly long reach by swapping the original flip-flop stem out for a Velo Orange 6 degree rise/90mm reach threadless stem/stem adapter combo. The bike handles very differently from my other three bikes. The Tachyon is fairly stout, and though I have pushed the front wheel as forward as possible in the bike's unique sliding fork drop-out, the trail is still pretty high. 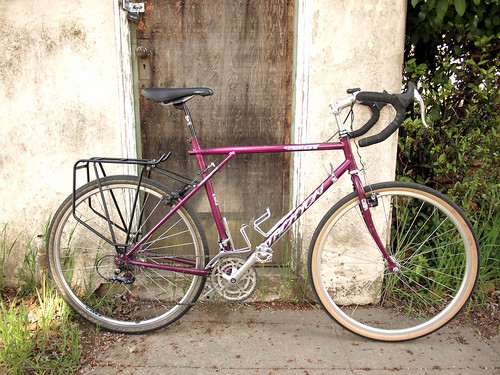 I got off work a little early today because I started very early, and it was a gorgeous day out in the valley--breezy, sunny with blue sky and beautiful faint-white clouds. I don't even have a saddle bag on the bike yet so I put a wind breaker and a cable lock in the pannier, as well as the essentials--wallet, cellphone and keys and began rolling. I also don't have any tool, pump, and spare tube so I have to keep my fingers crossed, hoping not to get a flat too far away from my cottage. Because of my fear of puncture, I decided to stay on pavement and went with a familiar route--Old River Road to Hopland and back.

Perhaps because of the tailwind on my bike, even with a stout bike I was able to move quickly on a fairly high gear--46/13 I think. Old River Road's undulating flatness is perfect for pushing a big gear and go fast. It was really pretty out as poppies and other wild flowers are blooming all across the hill sides and sides of the road, and it was not only picturesque, but also fragrant. I savored the breezy warm afternoon and soon got to the traffic circle just outside of Hopland where I would turn around. Looking down on my cyclometer, I was averaging 18mph without too much effort--I don't think my heart rate monitor went above 145.

As I turned around, I quickly realized the perceived ease with which I completed the outbound leg--strong tailwind. Now I had to fight headwind all the way back to Talmage. I got to a decent rhythm and kept a modest pace and just continued to enjoy the beautiful afternoon. Though now I can definitely felt my effort going up. My heart rate was hovering in the 150s and I had to ride off the saddle a lot more to keep my pace. Under this slight uptick in effort, I could definitely detect the less than perfect handling of this bike more. As I ride off the saddle, the bike's response to my effort is more clunky than my other three bikes, which remains stable and responsive even under very hard effort and bobbing when I am standing over the handlebar. I also needed to lubricate the chain as the sound becomes quite pronounced when you are not going as fast.

As I approached Talmage I decided to take a detour toward Ukiah on Roddick Cunningham Road so I could get some dinner in town. Roddick Cunningham is a shortcut to a point on Talmage Road halfway into Ukiah, and it's a small service road that wind through the local vineyards and orchards. Because I was changing directions several times, I wasn't fighting headwind the entire time and it was a more pleasant experience. After I got on Talmage Road I went in town and ate at Ellie's Mudd Hut.

On my way back and on an overpass on Talmage Road, I began to feel the back of my bike swerving around; I looked down and the rear tire was definitely more depressed than it should. I got a puncture after all. Since I don't have any way of repairing the flat, I didn't even bother to check what got it. Since it was less than a mile from my cottage I just strolled home under the setting sun.

It was a beautiful 30 some mile on my bike. Though after getting spoiled by my other bikes, the GT definitely doesn't feel or handle as nicely. I shouldn't expect too much as it was a mid-range mountainish bike that's fairly stout. I could probably improve the handling by using fatter tires than the 35mm Panaracer Col de la Vies I have on it right now and swapping out the narrow and somewhat awkward Modolo bar with ergo bends and not so ergonomic Dia Compe brake levers. I got some On-one Midge and Cane Creek levers ready. We'll see if I can make the Tachyon more enjoyable to ride.
No comments: