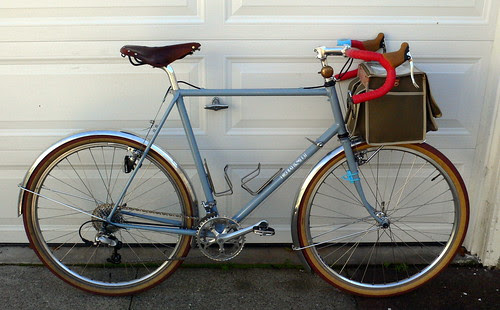 My Ebisu has a very distinctive grey color, and it worked really well with a pair of red Grand Bois Hetres tires. The ones I had on it were there since when the bike was new and has now 2500 miles on them. They are still in good shape. My Specialized Sequoia needed new tires, so I decided to give Ebisu a new look. I put a pair of low-mileage new-to-me white Hetres that I got in a trade recently, and then re-wrap the handlebar with white Fizik microtex tapes. I pumped the tires up to 45 psi with 26"x 1.25" Q-tube superlight butyl tubes (they have lower listed weight than the Schwalbe 650b SV latex tubes) and rode the Ebisu on the recent SFR DART Populaire. Everything being equal, the white performs about just the same as the red ones. Perhaps the red ones feel slightly plusher because they have been stretched and worn some. I also changed the front derailleur to a 8-speed Shimano 600 one to replace the 10-speed R700. The 8-speed front mech has wider cages and allows me to shift the entire cassette without trimming very much in the front. The next project for this bike, which may be months away, is to build a pair of lightweight event wheels out of Pacenti PL23 rims and Chris King/SON Delux hubs. 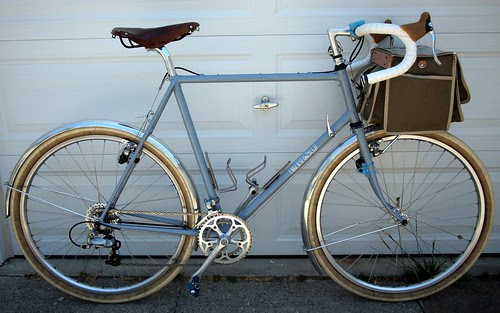 I gathered a team together to participate in the San Francisco Randonneurs' DART Populaire event. My teammates Rachel, Deborah, and M. got on BART at 8:45 to get across the Bay for our 10AM start. The DART, similar to Fleche, is a team randonneuring event with each team designing its own route but all ending at the same location. This SFR hosted two distances for DART, 200k and 120k. Given my lack of shape after two months of little riding, our team went for the 120k (Populaire) version. The route starts in Millbrae and meanders down the Peninsula along roads in the foothills, then cross the Dumbarton Bridge to East Bay. It goes east from Fremont and connects to Castro Valley via Palomares Road, then comes back to Oakland and Berkeley on Redwood Road and Montclair.


Our last teammate Rinaldi met us at the Chase Bank near the BART station, and led us through the easy going neighborhood roads through upscale suburbs on the upper Peninsula. We took the Polhemus Bike Trail over to Canada Road, then rode along the Crystal Springs Reservoir for a while, even stopping at the Pulgas Water Temple. The weather was forecasted to be very hot in the Bay Area, and though at this time of the day it was breezy enough to be comfortable, the pool at the Water Temple was inviting. Canada Road's smooth pavement and a slight tailwind made for fast riding, and we got to Robert's Market in Woodside in decent time. After getting a receipt and taking a brief break, we descended on Woodside Road and rode through Atherton and Menlo Park and headed for the Dumbarton Bridge.


I was a frequent user of the Dumbarton Bridge as a cyclist when I was working in Sunnyvale and Menlo Park, but all my teammates hadn't riding across the bridge in this direction. While noisy and smelly, riding across the Dumbarton Bridge always impresses me visually. We battled wind on the trail following the span and entered Newark/Fremont on Thorton Road. After making a couple of turns to get on Mowry, we found a Subway Sandwich in a shopping center to eat our lunch.


Even though I felt we were going at a good clip all morning, we barely had time to eat lunch at a leisurely pace. Soon we were on our way again riding toward Niles Canyon and Palomares--the first of two major climbs of the day. Now the weather forecast has become true, and it was hot! M. felt it must have hit triple digit on the tarmac. While Deborah and Rachel rode on toward our second control Westover Winery, M., Rinaldi and I stayed together and slowly made our way up. M. was coming from a business trip and had a late night the night before, and was struggling in the heat. We got to the Winery just as Deborah was about to move again to catch Rachel, who had rode on. The owner of the winery was super gracious and hunted down some cold soda for us and filled our bottles with iced water. Feeling more refreshed and knowing that the summit is close, we rode on and soon we were descending and riding on the downhill rollers that followed. As we approached E. Castro Valley Road, our team regrouped.

M. decided to get on BART at Castro Valley--the heat had done her in, and it was a bit touch and go whether we would make it to the next stop--our 2-hour control. When I was planning the route, the SFR DART organizer Roland Bevan and I had discussed having a control on Redwood Road to be the 2-hour control, and a park entrance (Anthony Chabot Regional Park) 2 miles after the climb and 18 miles from the finish seemed to be a good choice. I even called the park to check if it has a ranger booth at the Redwood Road entrance.


Deborah had gone ahead, and Rachel wasn't far behind her. When I got there, Rachel hadn't seen Deborah, and was wondering where to get water. I looked over and the sign says "rifle range, 1.9 miles; Ground Campground 2.0 miles; Campground 2.2 miles", my heart sank as we won't be able to obtain a proof of passage in time. I told Rachel to get some water while I wait for Rinaldi. Rinaldi rested some and decided to move on. I went after Rachel to get some water myself. After 2 miles of up and down riding with non-trivial hills, I finally saw the ranger booth at the bottom of a hill. I asked the rangers if they saw cyclists who fit Deborah and Rachel's descriptions but they couldn't tell me. Rachel must have gone to the group campground or the gun range to get water. I filled my bottles with a hose and began climbing back toward Redwood Road. At this point our team wouldn't finish on time.


I rode solo all the way back to Redwood and Skyline and was ready to descend. At this point finally I got some cellphone reception and was able to talk to Rinaldi on the phone. They were just 5 minutes ahead of me. I urged them to head for the finish, and M. is making her way there, too. I dropped down on Crestmont from Skyline, but missed the Butters turn, and end up at a dead-end street after dropping on a couple of 20% descents. At this point, I got off my bike and walked back to Butters, which took me 20 minutes. At least it was very cool now.

With the fog in full force, my ride through Butters and Montclair was chilly--what difference does a couple of hours and less than 10 miles make!--I rode through familiar roads in Oakland and Berkeley and stopped by the house to pick up a jacket before heading to the finish. Deborah, M., Rachel were already there, and Rinaldi brought his family soon after. We vegetarians and vegans on our team, and the staff at T-Rex brought us yummy pasta, salad, steamed beans, and corn bread. Many other DART teams were at various stages of dinner and I said hi and chatted with several folks I know. Rob, our regional RBA told us that 7 teams DNF'ed, and even the 10 teams that finished in time lost riders.

Over dinner folks chatted and ate merrily, and we all agreed that even though we couldn't get the official credit for the ride, we all had a wonderful day riding and 4 of us had more than 86 miles on our cyclometers. Thanks to the organizer's great effort we had a wonderful gathering at the end.
No comments: 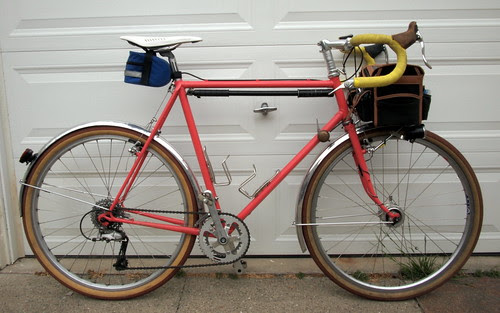 I got a pair of low-mileage white Grand Bois Hetres and put them on my Ebisu All-Purpose, and put them red Hetres that has been on the Ebisu since the bike was new on my pink Sequoia. I know it has been done before, but here it is again, the Hetres fit fine in between the stays without modification to this frame that was designed for 700x28mm tires. The front fork is now a Kogswell Konversion fork and fits the Hetres fine. Even the Tanaka fenders, which was intended to be used for 700cx35mm tires and was formed to fit 650b wheels/tires using a technique demonstrated here by Somervillain, accommodate the Hetres well with a set of good fender lines.

Other new-to-it parts include the Fizik Arione Saddle and an old pair of XT triple crankset repurposed as a double (these use spacers for the small ring).  I am experimenting with the Fizik saddle for long-distance riding. My only experience on it now is a 65-mile ride around Mt Tam last weekend. And though it definitely was different and less comfortable than the cushy old Terry Liberator saddle I had on the bike before, it didn't make me suffer too much. Perhaps I can make it work better with some more adjustments. 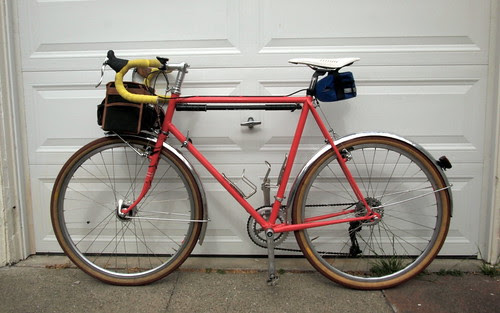 So far my experience with the Hetres on the Sequoia has only been on short around-town errands. They are noticeably faster and more comfortable than the near-new pair of Panaracer Col de la Vie tires. I noticed recently when I replaced the old, worn-out-but-smooth Panaracer Col de la Vie tires with a new-but-grippy pair, that the speed and comfort level suffered. These Panaracer tires are still great for touring and riding on unpaved roads (or both at the same time), but Hetres are definitely superior (now if only they can be cheaper).
No comments: