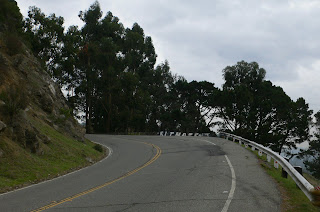 This is a short week. The forecast has rain coming for the next two days. I decided to get a short ride in before the rain comes. I took my il-pompino out. I touched the chain at a few spots to determine if it needs some lubes. It seemed fine. I rode through the Cal campus toward Hearst Gate. Today, I am taking a different route up the hill. Euclid is a quieter though at places steeper climb than Spruce. At a few pitches I was struggling to stay on my bike with its 40x17 gearing. After a hill past the Rose Garden, the grade eases and I was able to relax on my saddle. I have been riding Lomas Contadas over the last few weekends and my legs felt stronger today. Several times I got off my saddle to speed up on the ascent on Grizzly Peak. There were some minor squeaking noises coming from the drivetrain. I got off my bike at one point to check and concluded that it must be the chain--should have lubed it before riding. 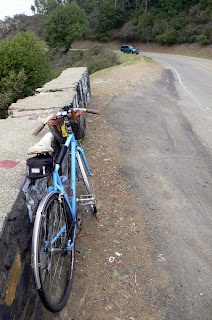 I got to the top faster than usual. After stretching my legs some and took some pictures, I spinned like a madman downhill. I didn't get rained on and enjoyed a wonderful ride. I will be visiting Ukiah for the weekend, and may get to ride Orr Spring road, which is scenic but very hilly. I will report on that when I get back.
5 comments:

I have been riding with clipless pedals for the last 5 years. I started out with shimano-SPD compatible pedals and then 2 years ago switched to crank brothers pedals. 3 years ago the thought of moving back to non-clipless pedals would never crossed my mind; even on my fixed-gear commuter, I had SPD clipless pedals on. I began using platform pedals on my fixed-gear about 2 and one-half years ago. I ride everywhere with my fixed-gear bike, even on fairly hilly terrains, and I didn't find riding with platform pedals to be any slower (granted the non-coasting nature of the fixie no doubt helps with the rotation of the crankset on the up-stroke).

I have since contemplated using platform pedals for my nice geared bikes. Although I like clipless and my biking shoes are comfortable, I want to be able to ride my geared bikes with normal shoes sometimes. Although there are dual-purpose pedals out there, I find them to be unattractive and a poor compromise.

The final straw is probably the noise factor. The clipless pedals I have used all began to make squeaking noises after a while, even though the bearing might be OK still. I am annoyed by the ever-present squeaking noises when one rides, especially when climbing or riding spiritedly on flats. After sunday's ride, I decided to go back to quill pedals. I have a pair of SR road quill pedals sitting around. I overhauled the pedals and attached power grips to them on my Rivendell Romulus. I am going to see how they do, and decide whether I want to go "clipless"-less on my Ebisu, too.

I will probably keep my crank brothers around, just in case I want to use them sometimes.
No comments: 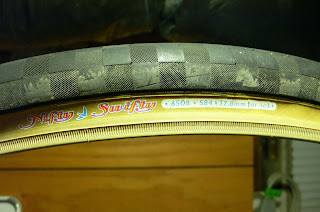 This cannot be considered a full update, so it got a 0.5 uptick in part number. I found a pair of Rivendell Nifty Swifty 650b tires on the local craigslist at a very good price and I bought them. Zac Stanley is the fellow that sold me the tires, which were on his wife's Bleriot. She didn't like the speedblend factor on the tire and switched to Grand Bois Cypres instead. 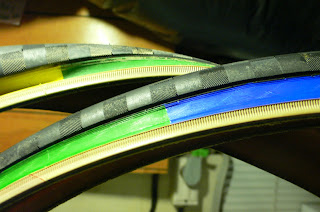 Even though these tested somewhat unfavorably in the area of rolling resistence according to a recent issue of Jan Heine's Bicycle Quarterly, I have had good experience with Rivendell's tires in the past and am happy to start with them. I also have a pair of Grand Bois Cypres sitting around. I will likely buy some Grand Bois Ourson and Hetre tires the next time I visit Japan for business. So here is the minor update: 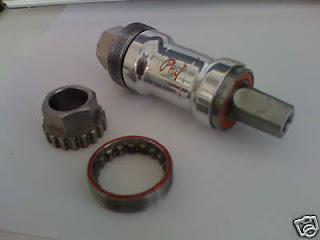 I hunted down a couple more parts for the Ebisu. Microsoft is teaming up with eBay to give incentive for people to search for products to shop on the company's live.com search engine. This page talks about how the cash-back program works. At some point Microsoft was handing out 30% cash-back. When I bought the two items for my ebisu the cash-back was 25%--still very good. First is a Phil Wood bottom bracket, english threaded (68 x 108mm). The spindle length is on the low end for the XD-600 crankset, but it should work. It comes with british rings and installation tool. The buy-it-now price was $90, which means I got $22.50 of cash back. 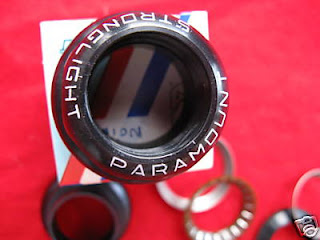 The second item is the Stronglight A9 headset that Jan at Bicycle Quarterly and Chris at Velo Orange keep praising. I bought this from Boulder Bicycle (which also sells Rene Herse constructer bicycles) through eBay. With the cash-back I got, I paid $45 including shipping. The only small complain I have is that this headset is black. I might still jump on a silver one if I come across it. This one also have "paramount" inscribed on it. The size convention on the headset can be confusing. But basically, for most quality bikes, the diameter of the crown race is 26.4mm and this is called ISO size for 1" threaded headset. JIS size still exists, but is rarer. It's confusing for me because I am used to looking for JIS spindle for non-campy square-tapered cranksets (Campy uses ISO spindle). Sheldon Brown's headset crib sheet is a great reference.

The hunt continues for the few remaining part, the most notable being the rims. Here is an updated list, reflecting these changes:

The San Francisco Bay Area is really a wonderful place for cyclists. M. and I are in off-season mode; though we have aspiration to stay in excellent shape so we can participate in the upcoming 2009 brevet season, we haven't been able to get a ride longer than 60 miles within the last month. In an attempt to at least keep our climbing legs alive, we frequent what are referred to locally as the "Berkeley Death Hills". The term is probably coined by Tom Holub on his bicycle-related website where he has detailed descriptions of many nice rides in the Bay Area. The name "Berkeley Hills Death Ride" is probably a tribute to the more famous Tour of the California Alps (AKA the Death Ride) in Markleeville, California. Although there is no organized or supported ride on the course described by Tom Holub, one of the local cycling club--Grizzly Peak Cyclists--occasionally have the ride on its ride calendar, and I have encountered out-of-town passhunters riding the course as a challenge.

M. and I have done 4 of the 5 hills Holub outlined, with Marin Ave still to be attempted. We often ride Centennial Blvd in the morning as a short but hard workout before heading to work. We have also done South Park, Claremont, and Lomas Contadas for exercise and great view a few times. On this weekend, we did 3 of them, although on two days.

On saturday, we got on our bikes (my Rivendell Romulus and her Serotta CRT 650b) and rode through Tilden Park and descended on Wildcat Canyon Road to San Pablo Dam road in El Sobrante. We rode on the newly-paved and painted wide bike lane to El Toyonal, and we begin to head up. This ascent is steep at several places, and doesn't really let up except for one short stretch of descent. The good thing is that the streets are quiet and mostly without fast-moving vehicles and is generally shaded. We worked our way through 1.5 miles of moderately difficult climbing, only to get to the foot of the last pitch--Las Piedras and Lomas Contadas. M., being the better climber of the two, took off ahead of me, though she is also struggling to continue her upward journey without resorting to her granny gear. Today, my 36/28 gearing wasn't low enough for me so I went down to the granny chain-ring and use 28/24 for the way up the monster. The cool weather, light traffic, good vista helped some, though the climb was still difficult. It took me 15 minutes to go from where Lomas Contadas start to steam train at the summit. All for the name of a good workout. Here is the bikely route map for this ride. According to bikely, it was a 20-mile, 3700-ft ride. If you want compact, hilly training, this is an excellent candidate. My Romulus performed well, it felt responsive and not erratic, which was especially important for low-speed climbing. I noticed that when I am off my saddle for extended period of time, I sometimes knock my knees on the bar-end shifters. Should I go to downtube for my incoming Ebisu?

On sunday, after cleaning the house, we decided to get out for another heart-pumping workout. We rode through the Cal Berkeley campus to the football stadium, then turned left on Centennial blvd heading up. Centennial is a pleasant enough road, with good pavement and nice vista. However, because it's the shortest way from downtown Berkeley to the top of the hills, on a nice day many cars travel up on it. Centennial is one we are most familiar with, though the familiarity only lessen its difficulty slightly. M. thinks it's the most difficult of the 4 death hills we ride. There is a turn on the road after one passes the gate for Lawrence Berkeley Lab that is an absolute killer. There is a steep climb leading to the turn, and as you turn, it only gets steeper. Centennial really gets your heart pumping. I didn't need to go down to the granny today on my Romulus. We got to Lawrence Hall of Science and took a moment to watch the sunset. These hilly rides are not only challenging workouts, but also offer incredible views at the top and exhilirating descent. 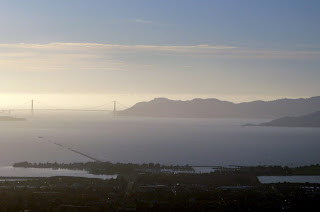 After a moment's rest, we continued climbing up toward Grizzly Peak. At the intersection of Grizzly Peak, we dove into Tilden on Golf Course Dr. At the bottom of Shasta off Golf Course, we turned right on Wildcat Canyon road across from the Brazil House. Shortly after, South Park is on our right. During winter months, the road is closed to motorists and is great for cyclists and pedestrians with or without their dogs. The pavement is great and the road is pretty shaded. We worked hard going up, though I felt stronger than on Centennial and the day before. My romulus reacts to my pedal stroke well and kept a straight line easily when i want to. I zig-zag a few times to rest along the way, and got dropped again by M. half way up. I felt pretty good when I crest Grizzly Peak. 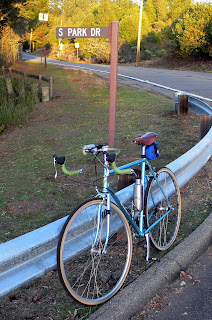 After watching numerous motorcyclists going by at speed far exceeding the limit, we decided to go back down South Park instead of descending via our usual route on Grizzly Peak. It turned out to be not that much better, as many pedestrians and dogs walk all over the road without fearing that a car will come through. I hit an object on the road which led my rear wheel to go out of true, though not serious enough to affect my ability to ride home.

We got home just before sunset. According to bikely, this (bikely route) was a 13 mile ride with 2910 ft of climbing. I have to say that I did feel stronger on the second hill today. M. and I agreed that we should attempt Marin in the near future.
2 comments: