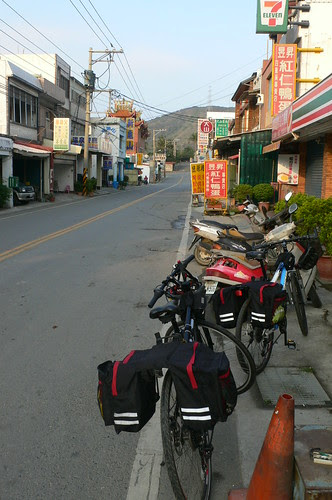 Ride: From Si Chong Xi to Fang Liao Train Station
Distance: According to Bikely, 27 miles, The route on bikely is here

Although the neither distance nor the terrain of the first two days of this tour were particularly difficult, the heat, the load we were carrying, and the so-so bikes we had made riding the first 130 or so miles enjoyable, but physically taxing. We were pretty tired on the second day and went to bed early. The next morning, we got up and got ready to go back. We decided not to go all the way to Kaohsiung because we were too fond of the car traffic in the city on the first day, and the route seemed to be a bit complex. The tour operator told us that one option is to stop at Fang Liao train station--some 35 miles from Kaohsiung--or any other train station north of it, and take the train back to Kaohsiung. Taiwan Rail takes bikes as luggage and transports them to any of its stations for a pretty low fee (although the bikes may not arrive at the same time as the passengers).

So after some breakfast at a food stall across from our hotel in Si Chong Xi, we headed back toward Che Cheng, a town on the coast. The 5 or so miles toward the coast is quiet and idyllic. We passed by a group of school children going to school in the morning. In Taiwan almost all school children wear uniform to school. Some of them waved at us. Soon enough, we were back on the coast and now were retracing our route on the first day going north.

The ride was quiet, if not uneventful. The time of the day makes such big difference in terms of temperature. Two days ago, we were coming south along the same stretch just past noon, and were practically being baked. Today, at 7:30 in the morning the temperature is quite pleasant with a breeze blowing in from the sea. We made the 27-mile trip in good time and got back to Fang Liao

We rode through the town toward the train station. It's not quite 10 in the morning. We talked to the administrators at the station about sending the bikes back to Kaohsiung to our tour operator. They handed us a simple form and after paying them $5 and filling out the form, we bid our bikes adieu as they would head back to Kaohsiung on a later train to be picked up by Twins Chuang. 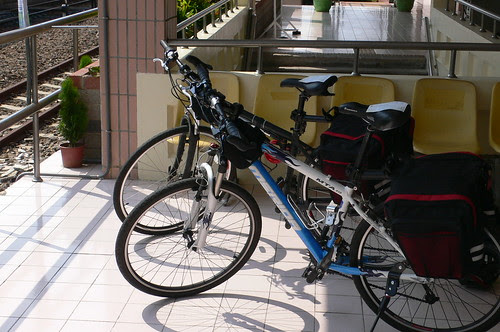 We bought two tickets to the Zuo Yin intermodal station--where the regular rail intersects the high-speed rail. We got on the train and took a nap, after transferring at Zuo Yin, the high-speed rail took us flying back to Taipei, concluding out mini-honeymoon. It was fun and we certainly recommend people taking a bike trip in Taiwan, as the infrastructure supports such trips well, and the scenery very good. The only thing is that you have pick the right season. Spring and late fall are generally better as the weather is cooler and not as much threat of typhoon.
No comments: