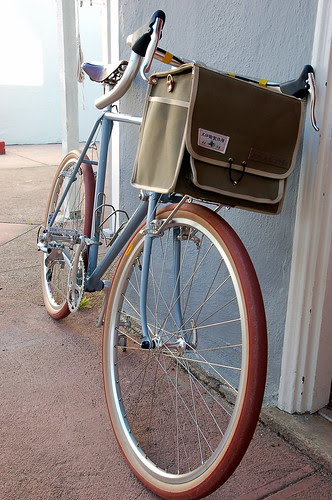 I got a call from Jitensha Studio last friday that my frameset is sitting in the shop. I went over on saturday to drop off the Stronglight A9 headset and the Phil Wood bottom bracket for Hiroshi's son to install. I picked up the frameset later and chatted with the young Iimuras for a while before heading home.

Later in the evening, I decide to frame-save the frame even though the bottom bracket and the headset are already installed. I spray T9-Boeshields into the frame through various openings and shook it around.

Sunday morning I woke up and began building it up. I had asked Jitensha to install the phil wood BB with 1 mm offset toward the driveside because I was afriad that the 108mm spindle might be too short for the triple sugino XD-2 I have. I put together the drivetrain--sugino crankset 165mm, shimano ultegra 6500 rear derailler, XD cassette 11-30t, 105 triple front derailleur and silver shifters from Rivendell--and began adjusting various settings. Very quickly I realized one of the pulleys on the ultegra rear derailleur is making a griding noise, and on the largest cog in the rear the mid-cage derailleur was having some problem. Another thing i noticed is that the crankset appeared sticking out way too much, making the angle between even the middle chain-ring and the largest cog untenable, causing the drivetrain to "ghost-shift" from middle (in the front)/large (in the back) to granny/large.

I removed the rear derailleur and put in a new XT long-cage derailleur, which worked flawlessly. I also removed the Phil Wood bottom bracket, clean the residual framesaver and loctite, and reinstall it with an offset now toward the non-drive side. After re-installing the crankset, the ghost-shifting seems to have gone away, though a more strenuous ride will give me a better indication of whether the problem has completely gone away. 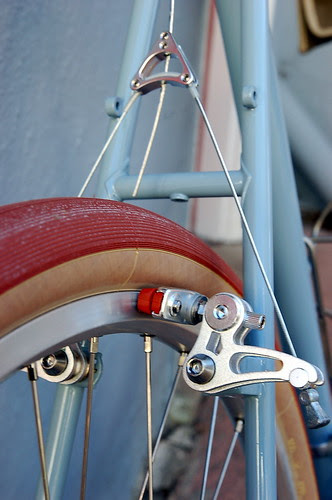 The Grenouille brakes I got, with adjustable brake shoes from VO look great, are light and extremely reasonably priced. They are, however, difficult to set up (with need to use 1mm allen wrench to tighten cables up), and lack stopping power the way they are set up right now. With Ebisu's front canti-boss I can't rotate the brake post so that the brake pads can make complete contact with the rim. I also have exhausted the length of the transverse (straddle) cable and the yoke can't be any higher. I am considering changing brakes--to Tektrok CR720 or NOS XT high-profile brakes, or even IRD cantis--unless folks can tell me what I might have done incorrectly.

I rode around the block a few times. It's a very responsive and spirited bike, reacting to my pedal stroke with a jolt forward. The hetre tires feel wonderful--cushy, smooth, yet very fast. I will have to report later after a longer ride.

I also set up the front rack that came with the frameset, and will get fenders sometime this week. Even though I have a Schmidt wheel built up and a IQ Cyo coming in the mail, I might hold off installing them once I get everything else dialed in first.

It's such a beautiful bike--the color and the paint job are both superb. Initial measurement indicates that the trail with hetre tires is ~ 45mm (my kogswell P/R with 40mm rivendell fatty rumpkins tires has ~ 40mm of trail, using the same method) . I can ride with no hand fairly easily and so far there is no indication of shimmy.

Kogswell P/R after a month 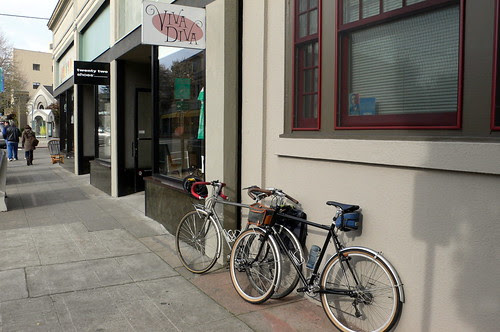 I have had the P/R for a little more than a month now. I have ridden it a lot, in fact, I didn't ride any other bike for this entire time--partly because i want to get some miles in to dial the settings in, and partly because my Romulus has no fenders on and it has been raining.

I really enjoy the ride of the bike. The standard-gauge tubing gives me a good springy feedback and edges me forward. I think the 155mm crankset I have on the bike now also helps to encourage me to spin more and mash less. Together with more regular training, I have seen improvements in my riding.

I also really dig the appearance of the bike and after adjusting the angles and switching a stem, now really think the moustache bar will work really well for me. I pulled on the swept-back part when i want to sprint, rest my hands there for upright, around-the-town riding, and hold the bars near the brake levers for climbs. 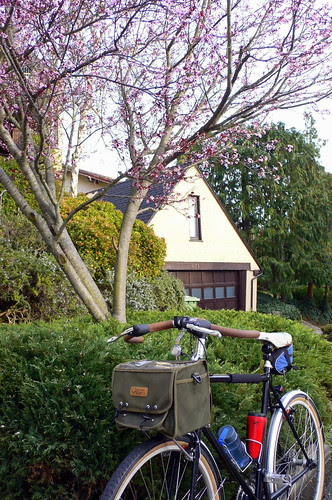 even though the bike has 40mm Riv/panaracer fatty rumpkins tires, I haven't noticed any significant difference in my performance and speed. the comfort and confidence level on descent around corners definitely have improved; the big tires also enable me to ride this bike on off-pavement trails.


riding with no hand at low to moderate speed is a piece of cake on this bike, even with up to 30lbs of load up front on rough pavement. The bike does shimmy above 20mph when you try to ride with no hand (in fact, the bumpy pavement seems to help to disrupt the onset of shimmy). I can attenuate the shaking by putting my knee(s) on the top tube, but I can reproduce the shaking every time. I am not concerned about it, as if I really need to use both of my hands (for putting on or taking off clothings on long rides), I will probably do it on relative small gradients and it won't take me long. I won't be surprised by it either. I switched out the stem recently to see if that makes a difference; the shimmy still comes, but at a higher speed. It's so predictable that I don't think it will cause me any problem.

The rest of pictures for my kogswell is on my flickr page. 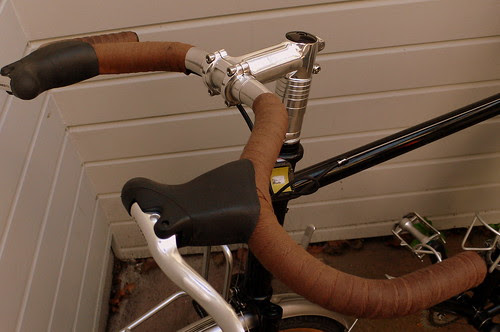 The arrival of my ebisu is delayed for another week. When it gets here and and after I build it up, I will likely sell my Romulus as the Ebisu and the Kogswell will cover all my cycling needs for now. I might jump on a fat-tire fixed-gear road bike (like the quickbeam) if a deal emerges. Even though I think the Romulus is a nicer-built bike, it lacks the versatility of the kogswell that I need as an everyday bike. The Ebisu will be my go-fast/long distance bike, as even with fenders and rack, it will weight slightly less than my romulus.
3 comments: