I had an old Specialized Expedition Deluxe touring bike from the 80's for a while. I trained for and then rode the 2007 Seattle-to-Portland ride on it. It was my main ride for a while, even edging a Romulus I had at the time. I didn't know as much about bikes as I do now, but the standard-sized diameter tubes it has probably contribute to the responsive yet supple ride quality it has. In Fall 2008, I sold it to fund the down payment of my Ebisu All Purpose, thinking that I would keep the Romulus alongside the Ebisu. I ended up selling the Romulus later also, and learned and changed somewhat my preference of bikes--toward bigger tires mostly on 650b wheel size, standard-diameter tubing, and higher offset at the fork. I am really happy with 2 out of 3 in my stable--the Ebisu and my Kogswell P/R, but have moved through several bikes as the third--my Romulus, a Raleigh One-Way, a Rawland cSogn, and most recently a Rivendell Bleriot. 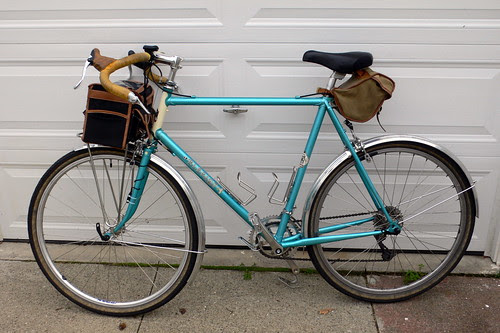 I actually like the Bleriot quite a bit. It's an attractive bike that fits 40mm tires with fenders, and rides fairly well. It feels different from my Ebisu and Kogswell in that it had oversize tubes and lower fork offset, and I sit somewhat differently on it than my other two bikes even though they are the same size. The Bleriot was a capable climber that at times felt spriter than my Kogswell during off-the-saddle spirited climbs, and definitely more edgy on the descent. I had suited it up well, and had plans to keep it for a long time. 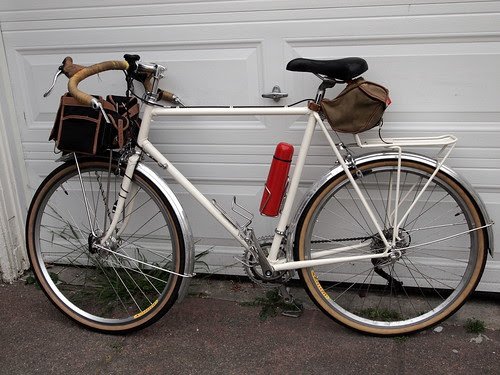 I changed my mind recently when I came across a Specialized Sequoia from the same era as my old Expedition. The previous owner had powdercoated the frameset (including a blackburn rear rack) but didn't go through with the build. I moved most of the parts from the Bleriot (except the wheels) to the Sequoia. And it is fitted with a pair of 650b Dyad/LX wheels, with the front a dynamo hub (DH-T660-3N, which doesn't seem different from DH-3N80, according to Peter White). The rear wheel has seen use on my Kogswell, but it became available when I built a 36h-Synergy/LX wheel to match up with the Kogswell's 36h-Synergy/SON20 front wheel. The Dyad dynamo wheel came from eBay with a near new Col de la Vie tire. A couple things stand out about these Dyad rims, 1) they are symmetrical both front and rear, and 2) tires measured wider on them. For example, the Col de la Vie tire, which is often measured to be 35.5mm on Synergy rims, measures 37mm on the Dyad.

The clearance on the frameset allows me to use 650bx37mm tires on it with 49mm Honjo Fenders. However, both the fork crown and the chainstays were too narrow for the fenders. instead of cutting the fenders to fit, I pressed the fenders to fit by fastening the 5mm bolts to the frameset. I put some rim tape to dampen the vibration that manifested as creaking noises during rides. 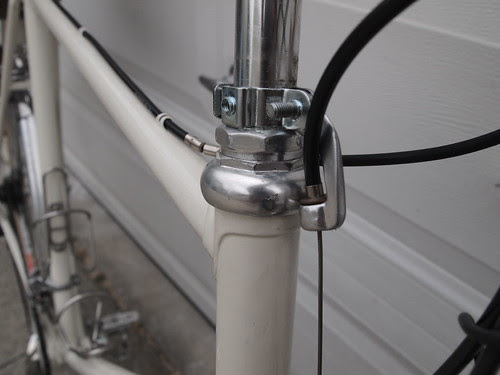 One of the quirks I had to deal with when building the bike is the tall original Specialized headset. The stack height is so large that I can't fit a steerer-mounted, spacer-based cable hanger for the center-pull brakes i intended to use on this bike. So instead, I rigged up this cable stop using a rear cable hanger attached to a stem-based bell-clamp. since I want to have a bell anyway, the clamp is actually functional there besides serving as the attachment mechanism for the cable hanger.


The bike rides great! I put about 200 miles in the first month since I built it up. The 650b fat tires plus the more flexy standard-sized tubes make for a comfortable ride, and the short and shallow but flared drops of on-one Midge keeps me pretty comfortable for long stretches of road. After testing it for a while, I will bring the bike to Ukiah where I work part of the week. It will be capable of going on paved or unpaved roads and let me get out even at night with its dynamo lighting. 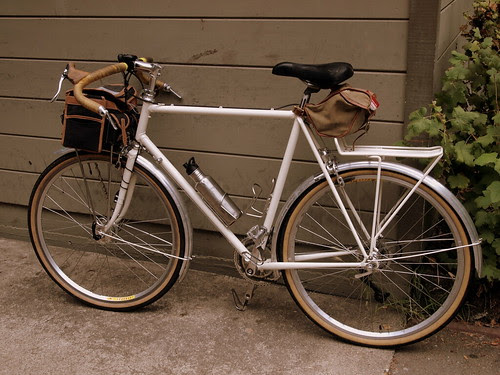