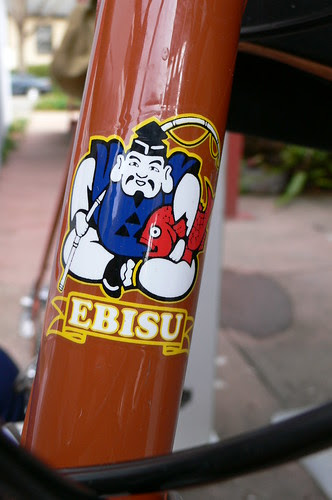 I received my Ebisu All-Purpose frameset this Spring (some of you have followed the build-up process) and really enjoyed the bike thus far. The All-Purpose is a sprite bike, even with a front rack, fenders, a brook saddle, and a front bag, but my wife still considers it a little heavy (currently it weighs in at 24.5 with the aforementioned add-ons) for her. Her Serotta 650b is a nice bike, but it wasn't built for 650b, and has horrible interfaces for fenders--for when we want to ride in rainy seasons here in the Bay Area.

I was following a thread on an online forum, and saw a member--Frank B.--mentioning his riding preferences--on dirt mostly--and lamenting that some of his nice pavement bikes--including an Ebisu Road model--are not ridden enough--leading him to consider selling the Ebisu. I talked with M. for getting the Ebisu, after some deliberation, she decided to go for it

I contacted Frank and asked about the size and conditions of the frameset. We reached a deal, and even though i was away at the time and couldn't send the payment right the way, Frank graciously sent out the frameset with the headset quickly. When I came back from my trip the box was sitting in my basement. Incidentally, this bike's first owner is Tom T., who lives a few miles away from us, and I have bought several parts from him in the past, and visited him in his house in Oakland.

Part of M.'s decision included selling both of her road bikes and leaving her Trek 620 to continue to serve as a commuter. It was a difficult decision for her, given that her Torelli was her first good road bike and she spent thousand of miles growing as a cyclist on that bike. As for the Serotta, even though she only spent one season on the bike, that's the bike she got married on. But she decided in favor of fiscal prudence and we sold the Torelli and the serotta frameset/650b wheelset fairly quickly. 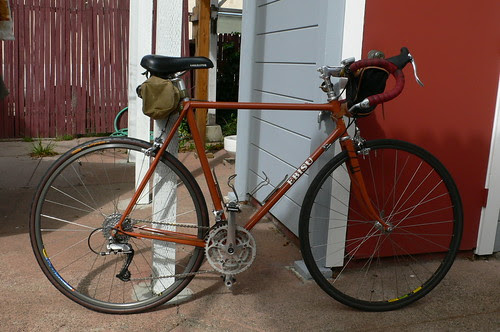 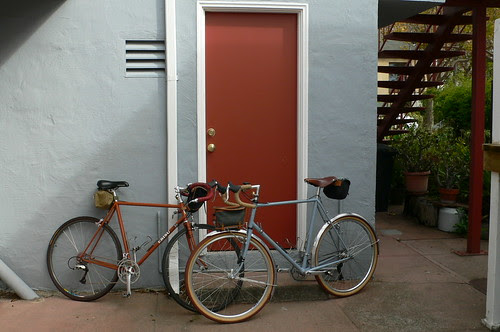 She is in the process of getting back to riding after recovering from over-use injuries as a result of our ambitious Shasta Super Century ride. The bike is light (21 lbs) and so far she likes the handling and the feel. When she gets in better shape she will get fitted on the bike. I am looking forward to riding with her again.