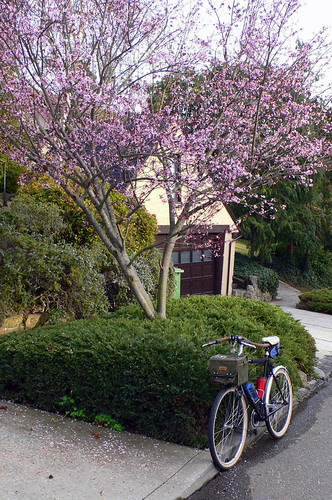 I originally purchased my Kogswell P/R (59cm) in early 2009 to replace my On One il Pompino as the daily commuter and all-purpose city bike. I haven't experienced several features--650b wheels, low-trail front end geometry, standard-size tubings--prior to owning the P/R, even though I have specified them for my then incoming Ebisu All-Purpose. After the first several rides on the P/R I fell in love with its handling and ride quality. Combined with general lack of affordable porteur rack at the time, the P/R remained more as a randonneur than a porteur, sporting a mini-front rack with a boxy handlebar bag sitting on top of it.

A year and 3000 miles later, I acquired a factory-second Velo Orange porteur rack from the online bike component company for approximately half the price of a new rack. The rack hung in my garage for a few months as I mulled over the option of using it. Obviously I will welcome the additional load-carrying capability that the porteur rack offers, but I was wondering about potential adverse effects on bike handling--stiffening of the fork, additional weight. I also had for a while a fixed-gear town bike (a Raleigh One Way) that was set up with a Soma front rack and a Wald basket to carry groceries, etc. I later sold the fixed-gear bike as it wasn't practical and gentle to my knees, and replaced it with a Rawland cSogn toward the summer.

With Rawland taking on trail-riding duties and Ebisu covering the long-distance rides well, I finally got the impetus to install the porteur rack on the Kogswell. It was relatively easy; these racks now come with pre-drilled tabs. I ended up using the lowest holes on the lower tabs even though they seem to be designed for 700c wheels. I also attached the metal fender to the tap under the rack. Finally, a pre-drilled rack strut connects the rack to the brake hole. The kogswell has two eyelets at the fork dropout. Typically the rear-facing ones are reserved for attaching fender stays. However, the VO porteur rack was designed in a way that it will only be level to the ground if it uses the rear eyelets instead of the front ones, usually reserved for racks. I cobbled together a collection of spacers from my fasteners bin, and install the fenders and the racks to share the same eyelets with minimal-to-none interference. 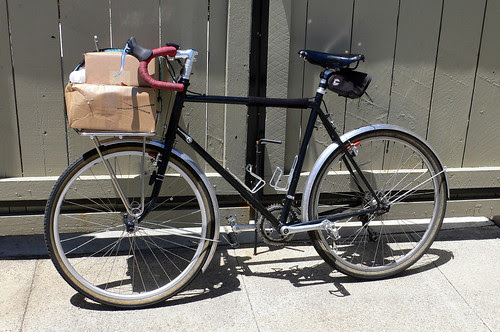 Several changes ensued. I swapped out the on-one midge handlebar and put a pair of Nitto Randonneur bars (that became available after my wife's Ebisu receives an update to Nitto Soba bars) and put on a pair Tektro brake levers (that are shaped closer to Shimano STIs than Campy Ergos). I also put in the Schmidt SON20/Velocity Synergy dynamo wheel and a Busch and Muller IQ Cyo front light. Most recently, I swapped out the hardy Rivendell fatty rumpkins for the newly available SOMA B-line 650x38b tires, which resemble the venerable Panaracer Pasela tires available in 700c and 26" wheel sizes. 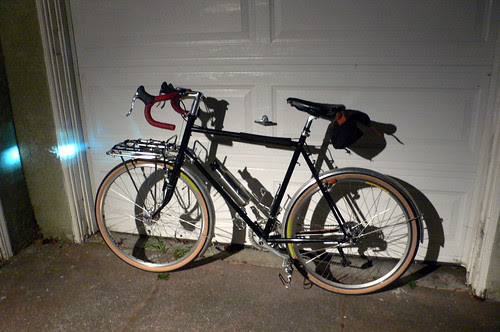 The P/R now is slightly heavier, and I can detect the slight stiffening of the fork. Since I am heavy, the bike still flex plenty in the front and it's hard for me to call the handling "dead" (although on fast sharp turns the bike is very slightly less graceful than before). The tires are quiet and roll better than the fatty rumpkins. I have carried plenty of loads on the front rack and the bike's handling never suffered for them. I have even taken the new-look P/R on several long and hilly rides and felt that it performed well. The P/R is really a versatile bike, too bad Kogswell doesn't make it anymore, and Anthony and Longleaf is considering separating the P and the R functions. Rawland is re-designing the Sogn and it sounds like the new Sogn will be closer to the P/R then the current Sogn. I look forward to the product of that endeavor.
No comments: