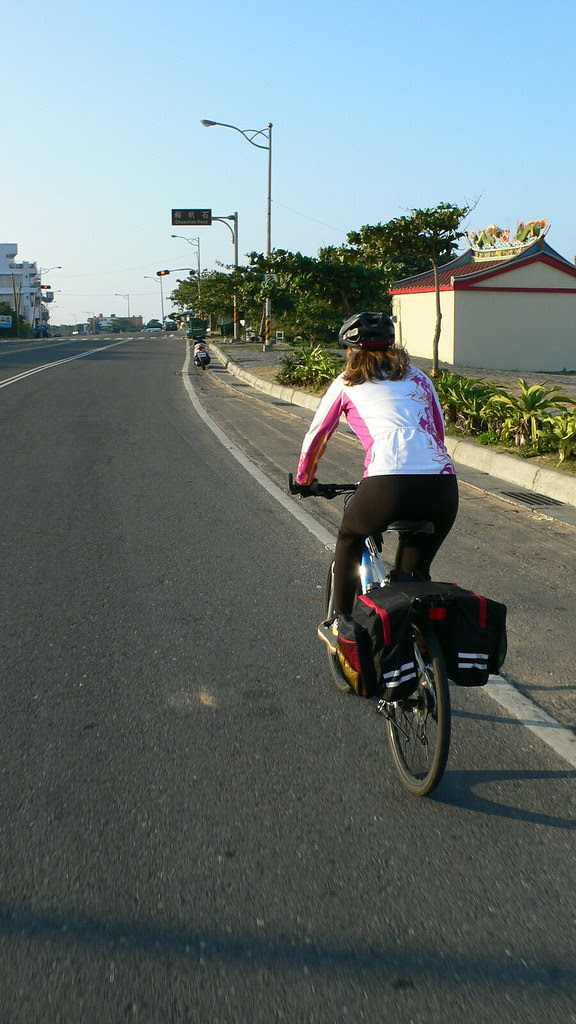 Ride: From Kenting to Si Chong Xi via Xu Hai
Distance: According to Bikely, 54 miles, The route on bikely is here.
More pictures of the trip is on my Flickr page.

We borrowed a fan from the innkeeper in Kenting to avoid turning on the AC and closing the windows. With no daylight savings in Taiwan, mid-spring days get bright at 5:30am in the morning. I went downstairs to the convenient store right next door and bought some breakfast food. It was already warm, so after finishing breakfast, I jumped in the shower and got a cold rinse before heading on the road.

We are in the tropics here and even at 6 in the morning it was pretty warm. We pedaled casually along the coast and enjoyed the golden rays on the water. We rode for about 4 miles and stopped at Eh Lwan Bi national park, which is the southern-most point of Taiwan. We walked around for a while and decided not to linger as to take advantage of the morning weather--warm, but not burning.

From the southern-most point, we moved back up north along the eastern coast. Immediately after turning for north, we began a climb that was the hilliest up to that point on our trip--but not too difficult compared to what we are accustomed to in Berkeley. The hill went up gently for about 1.5 miles, and we saw a pack of cyclists coming down, shouting encouragements as they go by. In Taiwan, many cyclists wear face mask on the road, partly to avoid breathing in too much smog if they are in the city, but mostly to protect their face from the burning sun. Both M. and I have such masks on, and do did those cyclists coming down hill. The climb takes us up to ridge and gave us an amazing view--that of eastern coastline reminiscent of Big Sur, except on the opposite side of the Pacific Ocean. 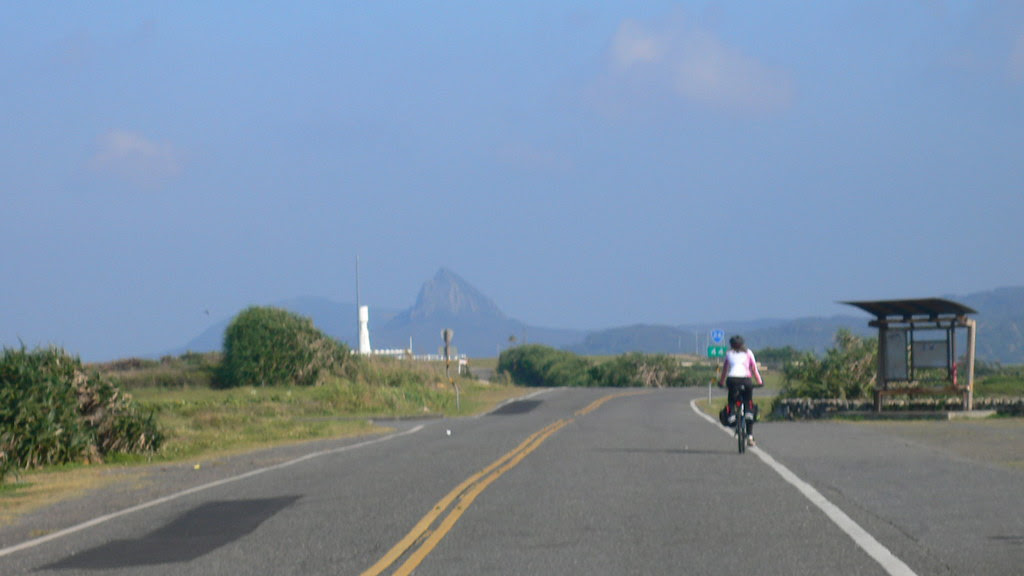 It was truly an amazing stretch. Combining with smooth pavement and almost complete lack of car traffic, this stretch from Eh Lwan Bi to Jia Le Shui on Hwy 26 must have been some of the most beautiful cycling road we have been on. The ridge goes on for a few miles before began a relatively gentle descend down into the coastal valley. 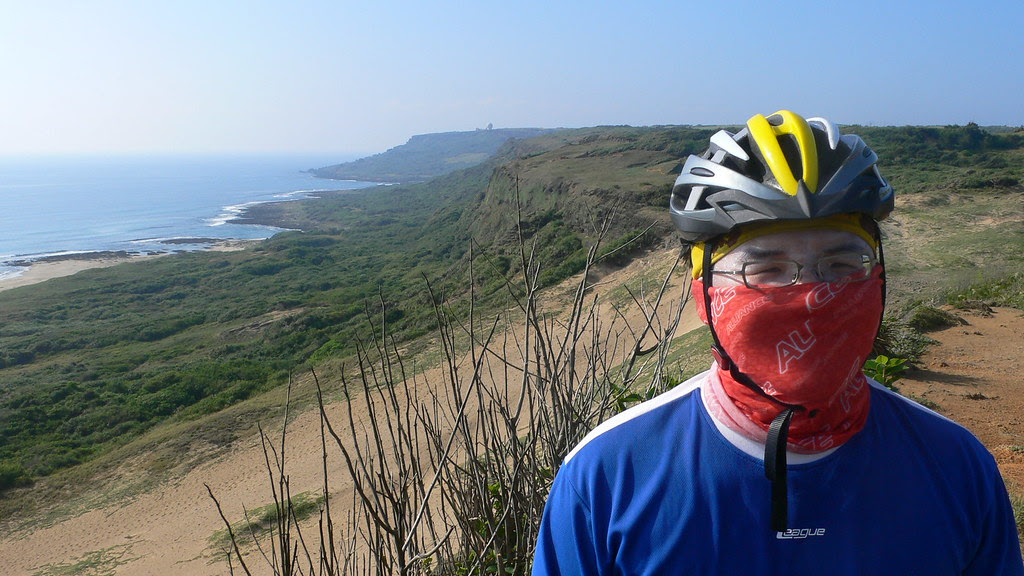 As we made our descent with the open ocean view in front of us, we saw a herd of water buffaloes in the middle of the road. These are bulls with large horns. They looked harmless enough and didn't even seem to pay attention to us as we rode past them, but we made sure to have no sudden movements as these are very large animals. From there we rode through the coastal valley, which has a variety of crops--banana, rice, coconuts, and many more. The terrain is quite gentle and a breeze was blowing by. We stopped in the township of Manchou to get water and use the restrooms. 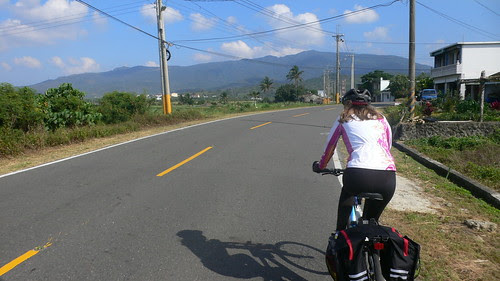 From Manchou, the road went north for a while and started to head back out to the coast again. At the town of Gangzai, we were on the coast again, HWY 26 at this point hugs the coast line as it heads north. There was almost no one around. On the east side of the road we saw some military training facilities, some of them have overgrown vegetation from lack of use, but there were no houses. Occasionally a car or a motor scooter would pass us, but we were by ourselves most of the time. 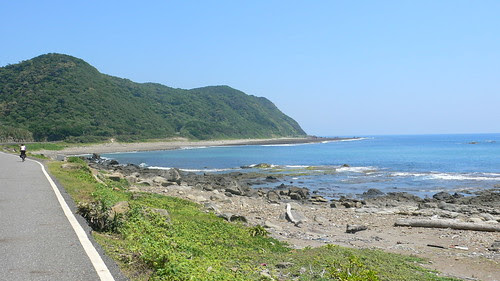 After about 8 miles or so, we came into a small village. We decided to stop and get something to drink at the village store. Most people in this part of the island are aborigines and speak their own languages in addition to speaking Mandarin (the official language of Taiwan) and Taiwanese (a popular southern Chinese dialogue). They tend to be darker and shorter in stature. They were really friendly, and some children came and said hi to M. because they don't see westerners that often. I got a soda in addition to water, as we are getting close to noon at this point, and were about to climb the most difficult hill of the entire tour.

The hill from Xu Hai to Dong Yuan goes up for about 10 km (6 miles); though gentle--nothing more than 6%, mostly at between 4% and 5%)--the combination of the weight we were carrying and the heat made it difficult. Parts of the climb were shaded, but it was probably close to 95 degrees, with over 90% humidity. We were riding entry-level mountain bikes with seatpost racks and some panniers. We stopped once to drink water and eat some food. M. told me she was feeling tired, even though it wasn't very steep. After some food and water, we felt much better and trudged on. As we climb we can see the green and lush valley down below. Cars were far and few in between. Even though it was hot and we were tired, it was quite pleasant nonetheless.

As the grade eased, we rode over a set of gentle rollers and entered the town of Mudan (Chinese for hydrangea). We saw along the street a sign that reads "this is the chief's house, welcome to Mudan". A few images and statues also reminded us that we are among the "mountain people", as they were referred to when I was growing up. We stopped at a liquor store to get something to drink and a little snack. The shopkeepers were friendly, and pointed us to a couple of stools for us to sit and rest while drinking our liquids. We bought and ate some rice crackers and drank a can of coconut juice and asparagus juice (very common, even popular in Taiwan) before taking off.

From the town of Mudan it's basically a set of gentle rollers before a long descend down to our destination of Si Chong Xi. About 30 minutes after we left Mudan and were still rolling, a motor scooter hunk from behind. I thought, "finally, someone is heckling us", as we had absolutely no trouble with anyone on the road thus far. Then I heard, in Mandarin, "those on bikes, I have been chasing you". We pulled over. A lady on the scooter stopped right next to me. She pulled out my wallet, "you left the wallet in the liquor store, the shopkeeper asked me to chase after you and return it to you". I was so surprised and grateful. She even mentioned "check to see if anything is missing". I wanted to give her a small reward but she wouldn't take it. Kindness from a complete stranger always came at most unexpected time. We were really grateful for her gesture. 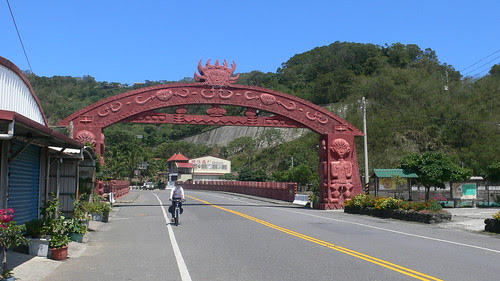 From where we were, we get a very good view of the valley below, and started to get a glimpse of a dam--Mudan Dam. The descend wasn't tricky, but we kept it easy-going as we were in unfamiliar territory. Along the way we passed by totem gates with aborigine statues. I also read signs along the way, and apparently this area is quite historical for the tribes of people living here.

At about 2:30pm, we go to our hotel in Si Chong Xi--a hot spring town where almost every hotel offers hot spring as an amenity, and a public hot spring bath house stands in the west end of the town. It's a pretty small town with one main street. We got into our room, took a warm shower and rested some. We also walked around for a short while, but there wasn't much to see.

This day was definitely the highlight of our tour. The stretch on the eastern coast, as well as rumble in the inland valleys and the climb up to Mudan were amazing. We would definitely recommend the ride to others!
No comments:

Whew, that was a busy 9 months--2009 is whizzing by so fast. Weeks of travel for various important things in life--marriage, for example--really put the crunch in time and I have been in catch up mode all year. I think the tide has turned and I might actually get some reprieve for a while. This will give me some time to catch up on my bike-related blog and flickr uploads as well. Posts I am planning to write about:

- Our Taiwan bike trip
- Our training rides for the Shasta Super Century
- Our trip to Shasta for the super century
- M.'s new-to-her Ebisu: build up