The frameset arrived today! I have been collecting parts all week. See below for my google docs spreadsheet.


I haven't built with STI brifters for a while and forgot about the restrictions they impose--front derailleur needs to be shimano road derailleur for the indexing to work well with Shimano cranksets. I got a pair of Shimano FC B124 110/74 BCD crankset, which were made between 86' and 88'. Hopefully this combination--9-speed brifters, 9-speed road front derailleur, 9-speed chain, and old shimano compact crankset--would work.

You can see from the screenshot where I get the parts from--some from my parts bin, some from eBay and Craigslist, and some from my friends. I also bought a few items from Rivendell and a couple of online bike shops. There are also a few items I will buy from my local bike shops. 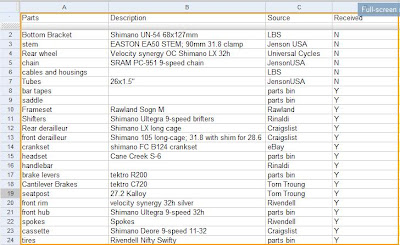 I still need to finish tensioning and truing the front wheel I laced up over the weekend. It should be a fun build!

In the meantime, let's stare at the pictures of the frameset

I spoke with Hiroshi Iimura at Jitensha Studio shortly after I came back from a trip a week ago and learned that I probably shouldn't expect my frame to arrive until early March (he was assembling an Ebisu that someone had ordered in early August; the wait for an Ebisu is now up to 5 months). Nonetheless, I decided to get the wheels build up. I have 36h hubs--Ultegra 10-speed rear and Suntour XC Comp NOS front--and I had to decide what rims to use. There were really only two options for my purpose--velocity synergy and grand bois rims. To complicate the matter slightly, Iimura-san only has access to 32h Synergy rims and 36h grand bois rims.

I initially went with Grand Bois and later changed my mind and decided to go with Synergy. For that, I had to supply the rims, too. I bought 2 rims ((with yet another twist; Iimura-san prefers not to use OC rims, so I bought two non-OC ones) from Rivendell (likely the only place in the US that stocks 36h Synergy rims in 650b). Hiroshi is a little backed up after spending a month in Japan. But since my frame won't arrive for another 6 weeks, I am not in the hurry. When I was at Rivendell, I also dropped off my SON20 hub for Rich to build into a wheel. I still need to get a light for it, and I am thinking about getting a Busch & Muller IQ Cyo.

I will get some pictures of the wheels up when I get them back from the builders.

By the way, I also got a pair of Grand Bois Hetre tires from Box Dog Bikes when the shop had a 20% sale.

A second 650b build in the works: Rawland Sogn

My best friend Wayne from high school got married in 2007. He is a jet-setting consultant working for a leading firm. I told him at his wedding that when he is more settled (in one location). I will build a bike up for him as part of his wedding gift.

He is now probably going to settle back in the Bay Area. We talked about what kind of riding and his budget (I will pay for the frameset and help him build the bike up, and he will pay for the components). I looked around for a high quality pre-owned frameset that has attributes I prefer--steel, good tire clearance, braze-ons for fenders and racks--as well as one that will suit him and his riding style--he has been pretty active all his life and did a 2-day bike trip 5 years ago; while he won't be racing, he would like something that is comfortable yet not sluggish.

After considering and searching online for a while, I think frames from these makers--Soma, Surly, Salsa, Masi, and Rawland--form a good pool to choose from for him. Rawland was closing out their 2008 stocks of Sogn frames with slight cosmetic blemishes at an amazing price. I talked to Wayne for a bit and showed him some pictures on flickr and we decided to pull the trigger.

Now we have to collect parts for it. I looked through my parts bin and thought about what kind of build this might be. I presented a few options to Wayne to decide, and came up with these decisions:

To continue a tradition I started with my Ebisu build, I will start a thread on the progress of the Sogn build. As I get parts and the frame, I will update it and add pictures.
2 comments: