I live in the San Francisco Bay Area, which was listed as the third most congested metropolitan area in CNN's recent news story. I have a very long commute, even by Bay Area standard; I live in Berkeley and my office is 45 miles and at least one bridge away in Menlo Park near Stanford University. This is already an improvement as I used to work for a chipmaker in Sunnyvale, which is 10 miles further from my house than my current office.

I used to drive or carpool with my neighbor (who still drives to San Jose on a daily basis), and it takes about anywhere between 50 minutes to 1 hour 45 minutes in my experience to get to work. That roughly translate to 500 hours of commute time in a work year (that's 12.5 working weeks!).

And most of this commute time is wasted because you really cannot do anything else but focus on the road. Part of the reasons I think the traffic is so congested is because people try to do other things to utilize this "waste of time", but ended up getting into traffic accidents and clogging up the traffic even more.

I decided that this was too much a waste of my life and began to take public transportation to work. This sounds like a no-brainer until one considers the distance, and it would take a local bus 3-4 hours to travel that far. I ended up studied all the routes, schedules, fares, and policy regarding bringing bicycle on-board of all the transit in the Bay Area to figure out how I can do my commute on public transit relatively painlessly.

My typical day starts with a short (less than 5 minutes) bike ride to an AC Transit bus stop or the downtown Berkeley BART station. BART is the rapid rail transit system in the Bay Area that circumvent any possible car-congestion, but bicycles are not allowed on-board past 6:40AM (from Berkeley station) in the morning; the restriction isn't lifted until the 8:47AM train. So unless I am leaving before 6:40 or after 8:47, I would go for the bus. There are at least 4 different transbay bus lines within 5 minutes of biking from my house. I usually go for one particular line, if I was late or the bike rack already filled, I would ride to another stop to catch another line. I sort of have the schedule figured out so I can go in a general circle if I continue to miss buses.

It takes about 25 minutes on BART to go from Berkeley to San Francisco, and anywhere between 25 minutes to 50 minutes on a bus, depending on the line and the traffic on the Bay Bridge. Once I am in San Francisco, I would ride about a mile from either the bus terminal or the BART station to the Caltrain commuter train station near AT&T Park (the home of the San Francisco Giants). The bike trip takes between 7 to 10 minutes.

Caltrain has these express trains that skips certain stops. The fastest ones are called "baby-bullets" that basically skip a lot of stops. I usually opt for any express trains and the trip from San Francisco to Menlo Park is between 22-30 minutes. My office is less than 5 minutes biking away from the train station.

In the best scenario, it takes me 1 hour and 15 minutes door-to-door, but usually the trip is between 1 hour 20 minutes to 1 hour 40 minutes. On the surface, it seems that I am spending more time commuting than when i was driving, but I always spend time reading, doing some work, or catching up on sleep on the train or bus, so time is actually not wasted.

Things are not so easy for us commuters with bicycles, though. Caltrain and AC Transit buses have limit on how many bikes they can accommodate, so sometimes we are "bumped" from a certain train or bus. And since public transit is a minority option in the Bay Area and most likely not sufficiently funded, the next train/bus can be an hour away. However, without my bike I cannot make the connection happen in the time I described, and will stretch my commute time beyond what's reasonable.

I also arranged with my office so that i can work at home once a week. The local government has always tried to address the congestion issue, but in my opinion not in the right way. We spend so much money building a new span for the Bay Bridge when instead that money can be used to extend BART further south to make some sort of loop or increase the number of trains/buses. The real solution to resolve congestion and all the ailment that comes with it (pollution in greenhouse gas and otherwise, time wasted, road rage, additional road maintenance, etc.) is that we should all simply drive less. I heard a figure that 40% of Bay Area commuters work less than 5 miles away from where they live; if a significant portion of these people can simply take a bus, or ride their bikes to work, our congestion will surely be reduced dramatically.

On my way home, I usually relax and just enjoy the beautiful view of the bay and the city on the bridge. I usually get off a few miles from home and then ride my bike through parts of town I would otherwise not visit (rockridge, mostly). My routine takes me finally through the Cal Berkeley campus and then descend to my house. I often get to marvel at how young college students look to me nowadays.

I like my commute because I get to ride through San Francisco and sense the city's vitality during its busiest hours. I also love riding on the bus across the bay bridge, especially in the afternoon when I can get a view of the city skyline with the sunset in the backdrop. My commuter is my old chrome fixie, which I mentioned briefly in a previous blog, and will devote an entire entry to it in the near future.

[This is a view I have on my bus commute] 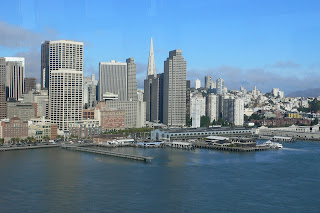